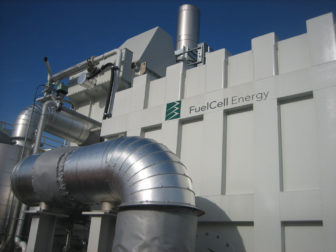 Washington – Congress dealt a key – and growing – Connecticut industry a blow by failing to extend a fuel cell tax break at the end of the year – an omission that could cost the state jobs.

While larger wind and solar projects received extensions of key federal tax credits at the end of 2015, incentives for a number of other alternative energy sources – such as fuel cells, distributed wind, geothermal heat pumps, and combined heat and power – will expire on New Year’s Eve.

That has prompted some of the affected industries to warn of potential job losses.

“It puts the industry, which is based in Connecticut, at a significant disadvantage,” said Joe Rinebold, director of energy at the Connecticut Center for Advanced Technology.

Fuel cells take hydrogen – usually from natural gas – and combine it with oxygen from the air. The reaction creates electricity and the only emissions are water.

Rinebold says the end of the tax credit “is a big loss to the cash flow” of fuel cell producers.

Connecticut is among the top states, along with Massachusetts, New York and California, in the production of fuel cells. He said the industry employs about 3,000 people in the state and generates $600 million a year in revenues. Doosan Fuel Cells, a Korean company, also has a presence in the state with a facility in South Windsor.

Rinebold says there are as many as 600 companies in the supply chain as well.

But the industry was dealt a blow in October when the Department of Energy and Environmental Protection, or DEEP, bypassed Connecticut’s fuel cell producers in awarding state-run energy program contracts, which are expected to lead to the purchase of nearly 800 megawatts of clean-power generation by utilities in Connecticut, Massachusetts and Rhode Island.

Solar developers that bid  for the contracts were the main winners, with about a dozen proposed fuel-cell projects left on the sidelines

Failure to win those contracts led FuelCell Energy to announce layoffs at its corporate offices in Danbury, its manufacturing site in Torrington, and several “remote locations.” A total of 96 people were laid off, representing 17 percent of the company’s work force.

Chip Bottone, president and CEO of FuelCell Energy said failure to extend the tax breaks contributed to the decision to shrink the workforce.

Bottone also said fuel cells are an American technology with a U.S. manufacturing and supply chain, unlike solar panels made in China.

“There are over 10,000 Americans who work in the fuel cell industry and want to continue to be employed,” Bottone said. “Recent layoffs by U.S. manufacturers are a direct result of the Congress’ inaction to correct this issue while Chinese solar (photovolotaic) manufacturers prosper.”

“There is a global market demand for exporting of U.S.-made fuel cell products,” he said.

Will Congress take another look?

The industry and its supporters hoped Congress would extend the fuel cell tax break in an end-of session spending bill that will keep the federal government running until April 28.

But Republican leaders in Congress, who promised the industry that it would act to extend the tax break before the end of the year, preferred to push the issue down the road for a new administration and a new Congress to tackle.

A powerful coalition of fossil fuel industry and conservative anti-spending groups that included the Koch brothers had lobbied Republican leaders to let the fuel cell tax breaks and other incentives expire. They argued the tax breaks were a waste of money and approval of another tax-extender bill would make tax reform more difficult next year.

Connecticut’s Democratic senators say they are outraged the GOP leaders broke their promise.

“I am deeply disappointed and downright angry that Republican congressional leaders failed to keep their promise to extend the fuel cell tax credit,” Sen. Richard Blumenthal said. “I will continue to fight to ensure that our federal dollars – including energy tax credits – cover all relevant technologies, including solar, wind and fuel cells.”

Blumenthal hopes the Trump administration takes another look at the tax break.

“History is on our side because fuel cells are a cost-effective, clean source of energy,” he said. “That should be understood by the new administration to be an urgent and immediate priority.”

Bottone is also optimistic Congress will take steps to help his industry.

“We remain confident that Congress did not intend to choose overseas manufacturing at the expense of American jobs and will extend the tax credit for fuel cells and other … technologies that are impacted by the lack of inclusion, or correct this by some other means,” he said.