Washington – The growth in political clout of Connecticut’s Latino community is not keeping up with its population growth, so U.S. Sen. Chris Murphy and members of the Hispanic Democratic Caucus in the Connecticut legislature are trying to do something about it.

They established the Latino Leadership Academy last summer to introduce promising Hispanic community leaders to the rigors of politics and a network of people who can serve as mentors.

“The idea was simple,” Murphy said. “Connecticut Latinos are growing in both numbers and power, but sometimes it’s hard for community activists to make the leap to political activism.” 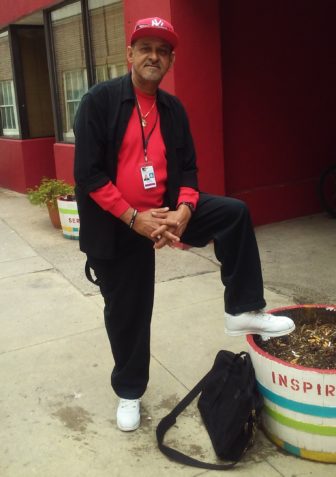 Jorge Cruz was among the first to apply for the leadership academy.

Connecticut’s population is 15 percent Hispanic, the 11th- largest proportion among all states. But only about six percent of the members of the state’s General Assembly are Hispanic. No member of the Connecticut congressional delegation is Hispanic – or black.

Murphy says only “a handful” of the 18 individuals who graduated from the leadership academy this year – the ceremony was in November – will run for political office.

“But they will know how to speak up to right a wrong,” he said.

Members of the first class at the academy, who come from every congressional district in the state, were addressed by various Latino leaders – and by Connecticut Attorney General George Jepsen.

Jorge Cruz, who moved as a child with his mother and siblings from Puerto Rico, was among the first to apply for the academy.

“I signed up and was happy that I was chosen,” he said.

A recovering heroin addict who lives in Bridgeport, Cruz now does outreach to other addicts and works largely with the homeless. He ran for city council last year and lost by 23 votes. He said he plans to run again next year.

The academy helped him “get acclimated” to politics, which he says is foreign territory to many Latinos.

“Politics is a culture,” he said. “You need thick skin. You need to have commitment, focus and vision.” 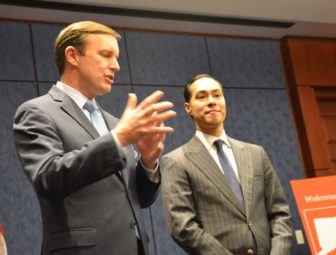 Sen. Chris Murphy, left, and Julian Castro, secretary of the Department of Housing and Urban Development.

Cruz said Latinos are disillusioned with politics and don’t take their right to vote seriously. “They don’t understand that they need to be involved,” he said.

Statistics bear this out.

According to the Pew Research Center, there are 280,000 Hispanic eligible voters in Connecticut. (California ranks first with 6.9 million.)

But that represents only 52 percent of Connecticut’s Hispanics. Some don’t have  U.S. citizenship or are disqualified for other reasons.

By contrast about 8 in 10, or 79 percent, of the state’s white population is eligible to vote.

Besides lower eligibility, there is evidence Latinos who can vote often don’t.

According to Pew, 48 percent of Hispanic eligible voters turned out to vote in 2012. By comparison, the 2012 voter turnout rate among blacks was 66.6 percent and among whites was 64.1 percent.

Murphy used money from his leadership PAC, to bring all 18 graduates of the first class of the Latino Leadership Academy to Washington, D.C., for two days in early December.

For some it was their first trip to Washington, and for most it was the first time they’d spent any time in the U.S. Capitol, getting a first-hand look at how Congress works.

Graduates of the Hispanic Leadership Academy with HUD Secretary Julian Castro, center, and members of the Connecticut Hispanic Democratic Caucus.

Enid Vasquez, who drives a school bus in Trumbull, had never been to the nation’s capital. She said she attended the Leadership Academy because she is thinking about working as a liaison between the police and the Hispanic community.

“I want to break the stereotype that Latinos are always in trouble with the police,” she said.

Leo Navarro, who has worked on a local political campaign, said the academy and the trip to Washington – which included a meeting with Julian Castro, the secretary of Housing and Urban Development – was a chance to hone his skills for a future career.

“I see myself eventually running for office,” he said.

Locking Latinos out of the system

“Our numbers are growing, and we need to be part of the political process,” Castillo said.

Frank Alvarado of North Haven, who is on the executive committee of the Connecticut Hispanic Democratic Caucus, said it’s always been a struggle for Latinos to break into certain professions, including politics. But things change, he said.

“You had to fight for everything, he said. “I was a Vietnam vet, and when I came home, I couldn’t be a cop. They always lock Latinos out of the system.”

For Connecticut Democrats, creating a farm team of future Latino political leaders – who will presumably be Democrats – is a smart idea.

Connecticut has become more Democratic as its Latino population has grown because Hispanics lean Democratic. The academy will help cement that relationship.

But to Murphy, the academy is a way to make sure Latinos are at the political table, something he says has concerned him for some time.

“I’ve had this idea rattling around in my head for a couple of years,” Murphy said.