State tells Hartford it must increase spending on schools 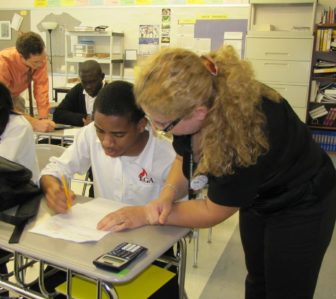 A classroom at Hartford High School, Law and Government Academy

The State Department of Education has notified Hartford school officials that their budget for the current school year, which slashed local school spending, is in violation of state law that prohibits low-performing school districts from reducing spending.

“Hartford is currently in noncompliance by $1,207,043,” Kathy Demsey, the state education department’s chief financial officer wrote the district at the end of September.

During an interview last week, Demsey said there has been no resolution since she sent the letter. “We are still working with them,” she said.

In order to receive state education grants, state law requires school districts to spend at least as much each year as they did in the previous year to ensure state funding is not supplanting local funding.

Financially strapped Hartford has until the end of the fiscal year on June 30 to increase its spending on schools or get the legislature or education department to exempt the state’s poorest municipality from the minimum spending requirement. If the district does not get a waiver, the state will cut the district’s state education grant by $2.4 million next year.

Currently, one-fifth of the district’s budget comes from local revenue and most of the remainder from the state.

The City Council cut government spending on Hartford schools by more than $1.2 million for the current year. In addition it voted to stop paying for certain school  costs, such as crossing guards, out of the city’s general government budget. This effectively forced the school system to pick up those costs, which totaled $1.1 million.

Dempsey said that transfer of such costs is not a violation of state spending requirements.

Pedro Zayas, spokesman for Hartford schools, which enroll 21,000 students, declined The Mirror’s request for an interview.

“The Hartford Public Schools budget development process has barely begun and we are working together with Board of Education and City Hall to ensure that adequate funding is provided for the school system,” he wrote in an email.

Read the letter to Hartford here.