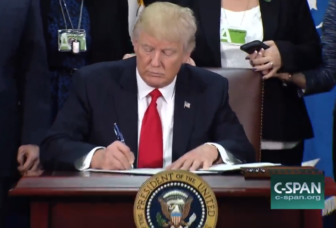 President Trump signs an executive order on immigration at the Department of Homeland Security.

Washington – With its policy of not turning over all undocumented aliens requested by federal officials, Connecticut is likely to be in the crosshairs of President Donald Trump’s new immigration policy, outlined in twin executive orders issued Wednesday.

With a stroke of the pen, Trump is trying to do what some Republicans in the last Congress were not able to do – punish “sanctuary” cities and states by withholding federal funds

But the term sanctuary – given to about 300 jurisdictions in the United States – is used to describe a wide range of policies, none of which actually protect an undocumented worker from deportation if federal law enforcement officials have him or her in custody.

Hartford, Willimantic and New Haven are among dozens of cities with police departments that have established policies of not asking the immigration status of those they arrest or detain.

Connecticut in 2013 passed the “Trust Act” that allows state and local law enforcement agencies to ignore a federal “detainer,” a request to hold an undocumented resident for immigration officials, if he or she hasn’t committed a serious felony.

On Tuesday, Gov. Dannel Malloy said, “We don’t actually have any true sanctuary cities in Connecticut.”

But to Trump, Connecticut and its “sanctuary” cities are breaking the law.

“We are going to restore the rule of law in the United States,” Trump said, addressing Department of Homeland Security employees after signing the directives. “Beginning today the United States gets control of its borders.”

But Trump did not specify what federal funds would be withheld from jurisdictions determined to be “sanctuaries.”

His executive order says the new Secretary of Homeland Securirty, John F. Kelly will use ”the Declined Detainer Outcome Report or its equivalent and, on a weekly basis, make public a comprehensive list of criminal actions committed by aliens and any jurisdiction that ignored or otherwise failed to honor any detainers with respect to such aliens.”

The Director of the Office of Management and Budget would then investigate and detail all federal grant money received “by any sanctuary jurisdiction,” Trump’s order said. Those jurisdictions would be stripped of federal funds, “except as mandated by law.”

Connecticut Attorney General George Jepsen said he is trying to determine if and how Trump’s actions would affect the state.

“My staff is reviewing the executive order and gathering other information, and so we are not in a position to comment in detail at this time,” Jepsen said. “I remain committed to taking action within my authority to protect Connecticut residents whose rights are threatened by this or other actions of the Trump Administration.”

The issue of whether jurisdictions that don’t comply with federal detainers are breaking the law is subject to conflicting legal interpretations.

The Justice Department ruled last summer that local law enforcement agencies are required by federal law to at least share information about illegal immigrants. However, the 3rd U.S. Circuit Court of Appeals in Philadelphia ruled in 2014 that local police departments are not required to hold undocumented immigrants for ICE.

An attempt to pass a law that would strip federal law enforcement money from jurisdictions that don’t share all information about undocumented aliens stopped or arrested by law enforcement faltered in the Senate in the last Congress.

That legislation would have put as much as $20 million in annual federal policing grants for Connecticut in jeopardy. Most of that money, more than $15 million, comes in the form of Community Development Block Grants.

If Trump wants to broaden the reach of his executive order, he’ll need legislation like the bills several GOP lawmakers, including Rep. Duncan Hunter of California and Sen. Pat Toomey of Pennsylvania, have tried to push through Congress.

Trump’s executive orders also pressed jurisdictions to enter into memorandums of understanding with the federal government that would allow local police to enforce immigration law.

They also called for building a border wall with Mexico, hiring 10,000 additional border patrol agents and building more detention centers, all projects that would need authorization and appropriations from Congress.

Aides said more directives could come later this week, including new restrictions on refugees and immigrants from Muslim-majority countries.

“Public safety is critically important, but these actions detract from valid and vital law enforcement efforts instead of enhancing them,” Sen. Richard Blumenthal said. “Local law enforcement needs the funding that President Trump’s orders would cut and divert to a politically motivated show project.”

Sen. Chris Murphy said, “President Trump’s divisive policies that build walls and take money away from local police do nothing to make us safer.”

“America’s greatness is rooted in our immigrant history, and those who try to turn our country against immigrants are preying on the worst kind of prejudice,” Murphy said.

“Nothing the president did today will make us safer, grow our economy, or fix our broken immigration system. These actions are political gimmicks that will serve only to harass and tear apart law-abiding families,” she said.