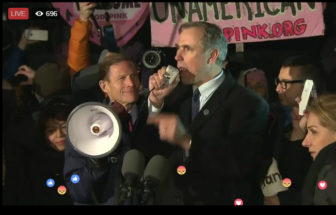 Washington – Connecticut lawmakers on Monday were on the front lines of Democratic opposition to President Trump’s executive order regarding Muslim immigrants, fashioning legislation and participating in protests aimed at derailing the new policy.

Sen. Chris Murphy introduced a bill, co-sponsored by Sen. Richard Blumenthal and six other Democratic senators — that would withhold any funding to enforce the executive order and declares it illegal based on the 1965 Immigration and Nationality Act, which banned discrimination against immigrants on the basis of national origin.

He and other Connecticut lawmakers were to join a protest to be held outside the U.S. Supreme Court on Monday at about 6 p.m. The event was live-streamed on You Tube and Facebook.

Murphy said that on Saturday morning Connecticut resident Fadi Kassar’s 5-year-old and 8-year-old daughters were turned away at the airport traveling from Syria after being approved as refugees.

“Those kids are the exact same ages as my two sons. Thinking about how scared they must have been, and still are, makes me furious,” he said.

One would immediately rescind the order, the other would limit the president’s authority under the Immigration and Nationality Act. Similar legislation was introduced by Democrats in the U.S. House of Representatives.

But it is unclear, in the current political climate, how the Democrat-sponsored bills will fare in a GOP-controlled Congress, even though some Republican lawmakers have spoken out against Trump’s order.

Among the Democrats who planned to attend Monday’s protest at the Supreme Court were Reps. Joe Courtney, D-2nd District, and Jim Himes, D-4th District, who took to the House floor Monday to condemn the ban.

Most of the opposition to Trump’s executive order is coming from Democrats, although at least  20 G.O.P. lawmakers have come out against at what has been dubbed Trump’s “Muslim ban.” The order, released without much warning to Homeland Security and other officials, has caused chaos and  confusion over the legal status of hundreds of travelers over the weekend and sparked dozens of protests.

Trump on Monday defended his executive order  that bars those from seven Muslim-majority nations from entry into the United States. His administration has denied that the ban is religious-based, saying that it is instead focused on countries that pose the greatest danger to the United States.

The president tweeted that the chaos at the airports this weekend was caused by a brief Delta computer outage on Sunday, not his new executive order. The bedlam, however, began on Friday night.

“There is nothing nice about searching for terrorists before they can enter our country. This was a big part of my campaign. Study the world!” Trump tweeted.

Connecticut Council on Islamic-American Relations (CAIR) Chairman Farhan Memon helped organize a rally at Bradley International Airport over the weekend. Although the airport has few direct flights overseas, despite its name, and no one was detained, Memon said the action was needed “because airports are symbolic of the way immigrants in 2017 are arriving.”

Following a weekend of protests nationwide, Democratic opposition to the ban grew Monday.

Courtney said Trump’s actions derailed a special visa program for local interpreters helping the U.S. military in the Middle East and Afghanistan. He said the program was established by Congress to provide a “safe haven and reward” to those who helped U.S. troops, sometimes at risk of their lives.

“Incredibly on Friday, with a stroke of his pen, President Trump slammed the door on the program,” Courtney said.

A member of the House Armed Services Committee, Courtney said he had already heard “blowback” from U.S. military leaders about the fallout of the executive order.

Himes said he began receiving “panicked emails” on Sunday afternoon about Tarek Alasil, a Yale New Haven Hospital ophthalmologist who had been detained in the Bahamas when he tried to return to Connecticut.

Himes said Alasil, who is of Syrian descent and has U.S. residency, or a “green card,” had been in the Caribbean performing cataract surgery for those who could not otherwise afford it.

“He was doing God’s work,” Himes said, “But he was detained and wondered if he would ever see his family again.”

Himes also spoke of a woman in her 80s, the mother of a sergeant in the 82nd Airborne Division, who was detained on her way to visit her son in the United States after five years of separation.

“She spent 33 hours in detention, some of those hours handcuffed…. because of the actions of President Donald Trump,” Himes said.

Himes also echoed the argument of Murphy and other Democrats, who said the executive order has strengthened the anti-U.S. rhetoric of ISIS and other Islamic terrorist groups.

“It is a travesty, it is dangerous national security policy,” he said. “All over the world, radical Muslims are saying ‘We told you so.’”

Rep. Rosa DeLauro, D-3rd District, wrote to the Acting Director of the U.S. Citizenship and Immigration Services (USCIS) and the U.S. Customs and Border Protection (CBP) asking for an update on the Trump administration’s “anti-refugee” executive order. She also asked the customs and border protection agency to release detained individuals immediately and allow attorneys into the secondary processing area so they can provide legal help to the detainees. 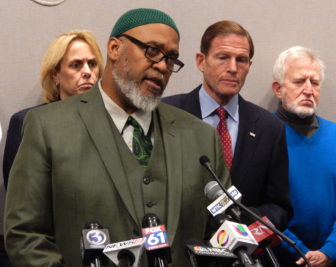 The American Civil Liberties Union, CAIR and other activist groups filed a class action lawsuit Saturday to challenge the executive order. The lawsuit was filed on behalf of two Iraqis with ties to U.S. military forces that were temporarily detained at JFK Airport in New York on Saturday.

Washington state Attorney General Bob Ferguson said on Monday he is suing President Trump,  some high-ranking administration officials and the Department of Homeland Security over the travel ban. The federal lawsuit seeks to invalidate the new policy nationwide.

“But we’ll take a look,” at the Washington state lawsuit, he said.

Jepsen has vowed to defend the state from another Trump executive order – one that would punish “sanctuary” cities and states if it were directed at Connecticut.

He was also the lead attorney general in filing a lawsuit to stop Trump from dismantling the Consumer Financial Protection Bureau (CFPB), established under the 2010 Dodd-Frank Wall Street reform law.

“It’s been different, that’s for sure,” Jepsen said of the Trump presidency. “But I wish we weren’t in this position.”