Despite spending five years and hundreds of millions of dollars to improve the state’s lowest-performing schools, the state’s efforts have lacked coherence and have left districts scrambling to comply with constantly shifting broad reform expectations.

That’s the conclusion of a report released Thursday written by a group of education experts from the University of Connecticut’s Neag School of Education about the state’s Alliance District program, which has funneled an additional $548 million to the state’s 30 worst-off districts since the 2011-12 school year. The report was commissioned by the Connecticut Council for Education Reform (CCER), a business-backed education reform group that lobbies at the Capitol and provides professional development to local districts.

“The yearly changes to the format, scope, and parameters of the plans, coupled with what seemed to be somewhat loose accountability for compliance, suggest a lack of an explicit guiding framework for the management of the Alliance District process,” wrote the UConn team, lead by Assistant Professor of Educational Leadership Jennie Weiner. “… Despite rhetoric of incrementalism and taking a stepwise approach to implementation, the actual plans suggested a floodgate approach.” 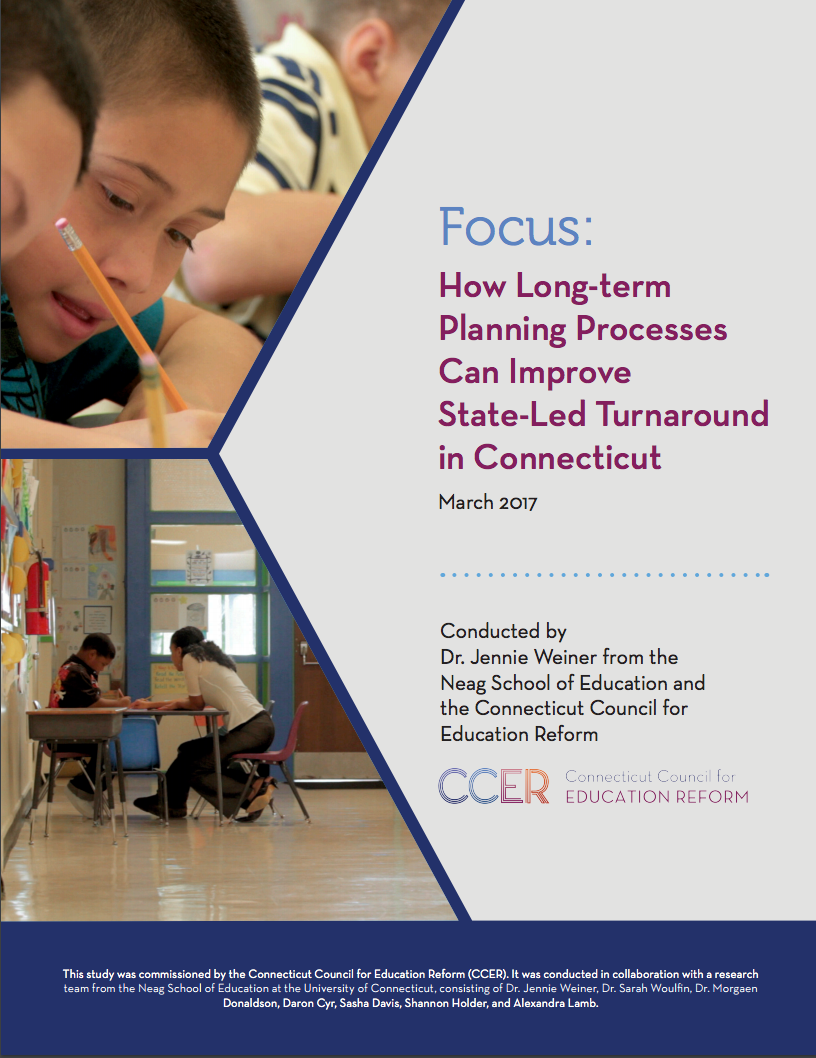 The Alliance District approach was created by lawmakers in 2012 to get the state more involved in improving chronically struggling districts. Now in its fifth year, this report on is the first to assess how the program has done.

Jeffrey Villar, the executive director of CCER, said during a press conference at the Capitol complex that he is concerned that this program is providing too little value under its current setup.

“Each year the state has made changes to the scope and requirements of the alliance district program and that essentially reduced the impact of the program,” he said. “These changes to the plans really made them moving targets for the districts… By making these planning tools inconsistent, and sometimes overlay prescriptive, the state sometimes impeded the district’s ability to focus on a small set of initiatives over a long period of time.”

As a result, he said, the Alliance District program, for some has “become an exercise of compliance instead of a helpful guiding force for meaningful improvement.”

The governor’s proposed budget does not propose directing any additional state aid to this Alliance District program. Instead, he is proposing state cuts in town aid and allowing towns to begin taxing hospitals. For towns that would come out ahead if they tax hospitals, he proposes they decide if any of that additional money go to these struggling schools. He also is proposing allowing the worst-off school districts to cut spending.

The administration on Thursday backed its approach in response to the UConn report.

“For decades, Connecticut has not sufficiently addressed the needs of our cities and towns with concentrated pockets of poverty,” said Meg Green, a spokeswoman for Malloy. “The Alliance District program is our lead educational initiative to improve student outcomes in our lowest performing districts by directing support where it is most needed. We all agree that increases in aid must come with greater accountability, and we always welcome a dialogue on how this important initiative can be improved.”

A spokeswoman for the state education department said the changing requirements should not be seen as a negative.

“Since the launch of the Alliance District program five years ago, we have worked to refine and strengthen the program toward the goal of improving academic achievement for students in our 30 lowest performing districts. Continuing to refine the process and program is a good thing,” said Abbe Smith. “It helps us strengthen how we support Alliance Districts and ultimately better serve our students. The process will likely evolve more as we engage in continuous dialogue with our districts and think about ways to build on what works, and to make changes when something does not work.”