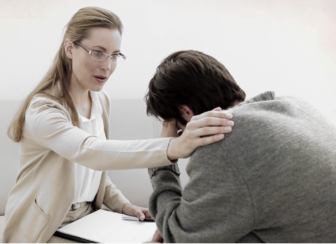 The 30-second spot, funded by 1199 New England SEIU, also comes five months after the union went to court to block nearly 500 layoffs tied to an administration plan to privatize 40 group homes for the disabled.

The ad, which opens on the empty halls of a state building, shifts to scenes of workers assisting a disabled child and an addiction recovery patient.

“It’s state workers that make these buildings homes for the disabled, a safe haven for children, recovery centers in an opioid crisis,” the commercial narrator states. “Because state workers have dedicated their lives to a simple-yet-powerful philosophy: to help others.

“It’s time to protect those who protect us. Let’s support our state healthcare workers.”

“These workers don’t deserve to work under the constant threat of losing their jobs or being ridiculed by elected officials,” 1199 spokeswoman Jennifer Schneider said. “We need to start standing up and fighting for the workers who make Connecticut a better place for us all to live. … Connecticut has one of the worst economies in the country and the highest income inequality. Clearly the policies of the last few years that balance the budget through layoffs and service cuts, while favoring billionaires, aren’t working.”

Malloy, who met with Capitol reporters on Tuesday, said labor concessions remain a crucial component of his plan to balance the next two-year state budget.

Finances, unless adjusted, will run $3 billion in deficit over the next two fiscal years combined, according to nonpartisan analysts, while the administration pegs the potential shortfall at $3.6 billion.

Malloy’s budget office and union negotiators have been in informal talks for months. And while both sides say discussions continue, no deal has been announced.

The governor told reporters Tuesday that without the labor savings, he could be forced to lay off as many as 4,200 workers.

The Office of Policy and Management “is hard at work” to strike a concessions deal, Malloy said this week. “And I am hopeful that our conversations will lead to a productive outcome in the weeks ahead. I remain very appreciative of our partners in labor for taking part in those discussions.”

The administration’s last downsizing effort, begun almost one year ago, has not proceeded as smoothly as planned.

Malloy announced last April that he would lay off at least 1,900 workers by mid-June 2016, to help balance the 2016-17 state budget. Another 500 to 600 positions would be eliminated through retirements and hiring restrictions.

Eleven months later, the administration has served 855 pink slips. Another 239 workers were laid off by the Judicial Branch.

One of the biggest challenges Malloy faces involves limits placed by federal rules and contractual language. Under many circumstances, the state effectively is barred from laying off workers.

For example, many of the larger unions have contract language prohibiting layoffs if they are being done to privatize services.

That was the argument employed last October when 1199 and a second bargaining unit, CSEA-SEIU Local 2001, went to state court to block nearly 500 layoffs planned as part of an administration initiative to privatize 40 group homes for the developmentally disabled.

The case still is pending.

Still, the administration says it will achieve its savings target in salary accounts because of higher-than-anticipated retirements.

From May through December, 480 more worker retired than during the same period in 2015, according to the governor’s budget office.

The SEIU ad is below: