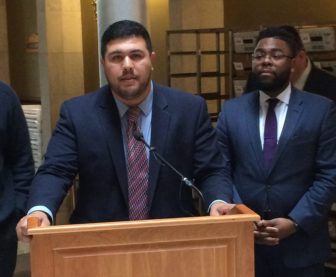 While leaders of the legislature’s Black and Puerto Rican Caucus were adamant Tuesday about the need to protect education, social services and working-class households in the next state budget, they were far less definitive about how to do so.

Leaders of the 24-member caucus said they are exploring raising income tax rates on wealthy households — a once popular proposal among House and Senate Democrats that has fallen into disfavor as Republicans have gained seats in both chambers.

“I think revenues have to be a part of the conversation. I know a lot of folks, especially in my community of Bridgeport, they’re afraid,” said Rep. Chris Rosario, D-Bridgeport. “They’re afraid of the deep cuts that are going to affect them.”

Caucus members have participated in numerous meetings, both at the Capitol and in their district, to identify constituents’ chief concerns about the projected shortfall in the next two-year state budget, which tops $3 billion in both years combined.

“We do not want to close the deficit on the backs of the working people in the state of Connecticut,” McGee said.

But the revenue-raising proposals Malloy offered in his budget plan last month affect this group significantly.

Chief among those recommendations is billing cities and towns for one-third of the annual contribution to the municipal teachers’ pension fund.

Municipalities would pay more than $400 million in each of the next two fiscal years.

More importantly, a 2015 study prepared for the Democratic governor estimates the required teachers’ pension contribution will skyrocket by 500 percent over the next 15 years — a problem caused by nearly eight decades of inadequate state funding.

Town leaders have said imposing a portion of this exploding cost on local budgets will drive property tax rates — already recognized as one of the most regressive tax burdens in Connecticut — through the roof.

The $200 property tax credit would be eliminated, costing middle-income households $105 million per year.

Malloy also is seeking a series of tobacco tax increases, including a 45-cent per pack increase to the cigarette levy, which together would raise $60 million per year.

“While we do not necessarily agree with everything in the governor’s proposal, we appreciate the difficulty,” McGee said.

And while caucus leaders did not volunteer any revenue-raising alternatives in their opening statements, they did discuss them when pressed on specific options.

When asked about raising top income tax rates on the wealthy — a solution labor leaders and advocates for social services espouse frequently — Rosario and McGee said this option must be considered.

“That is a part of the conversation,” said McGee, a member of the Finance, Revenue and Bonding Committee. “Let’s talk about all of the millionaires who are making tons of money? … How can we generate some revenue off of that?”

McGee quickly added that a more progressive income tax is not, and should not, be the only revenue-raising option under review.

“I can definitely tell you that when it comes to revenues,” Rosario said, “everything is on the table as far as the caucus is concerned.”