Washington – The nation’s health insurers, which are key to the survival of the Affordable Care Act, are asking the Trump administration to keep a program congressional Republicans have sued to eliminate.

Kristine Grow, spokeswoman for America’s Health Insurance Plans, said the push is to keep a “cost sharing” agreement that subsidizes co-payments and deductibles for people whose incomes fall below 250 percent of the federal poverty level, about $61,000 for a family of four.

“That’s priority one, two and three for us,” Grow says.

There are only two insurers, ConnectiCare and Anthem, in the Connecticut exchange this year, covering about 102,000 people.

And Anthem says it may drop out of AccessHealth next year – although nothing has been decided.

If he wants to keep premiums down and insurers in the marketplace, Trump will act on the industry’s requests, analysts say. If not the ACA may not “explode” as the president predicted, but it will limp through next year – especially in several states.

When President Obama was in office, and Republican lawmakers had no chance of his signing a repeal of the ACA, they sued to eliminate the cost-sharing program, saying it is  “illegal” because  it was  funded outside the annual appropriations process. The lawsuit says that infringed on the constitutional authority of Congress to appropriate funds.

The GOP won its case in a federal district court last year, but the Obama administration appealed that decision. The biggest thing the Trump administration could do right now to undermine the Affordable Care Act is just stop defending the lawsuit, analyst say.

Grow hopes Congress will appropriate money for the cost-sharing program, and that the issue is resolved “outside the litigation.” There’s a chance for that — several Republicans have said they support keeping the payments flowing.

Insurers also want a guarantee the Trump administration pays them what is agreed to for a reinsurance program. The program – aimed at stabilizing the market by making payments to insurers who covered high-cost individuals – ended in 2016. But payments for last year are due to go to insurers this year.

“Our request is that they are made as intended,” Grow said.

Trump is key to ACA’s future

Timothy Jost, a professor emeritus at the Washington and Lee University of Law and a health care policy expert, said insurers also want other things to keep them supporting the ACA, including tightening up the enrollment period and loosening requirements on provider networks.

“Another big thing is enforcement of the individual mandate,” he said.

That’s the requirement that nearly all Americans purchase insurance, something congressional Republicans are determined to scrap. That individual mandate is enforced through tax incentives — fail to buy insurance and you must pay a penalty.

“The Trump administration has been ambivalent on that,” Jost said.

One of the first things Trump did after he was sworn in in January, was to sign an executive order telling federal agencies to “waive, defer, grant exemptions from, or delay” parts of the Affordable Care Act.

“However, legislative provisions of the ACA law are still in force until changed by the Congress, and taxpayers remain required to follow the law and pay what they may owe,” the IRS said. So the mandate is still the law of the land.

The House Republican bill, the American Health Care Act, would eliminate the mandate – as well as many other provisions of the ACA. But it failed spectacularly because a group of GOP conservatives and a group of GOP moderates, rejected it. 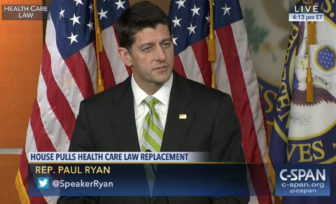 House Speaker Paul Ryan, R-Wis., says he’s working on another version of a repeal bill and, with the help of White House strategist Stephen Bannon, is in talks with members of the two Republican factions that helped sink the bill, the hard-right Freedom Caucus and the centrist Tuesday Group.

But Ryan has not disclosed any details of his latest repeal bill nor given a schedule for action.

Meanwhile, if Trump does not defend the cost-sharing subsidies, does not run ads that urge enrollment during the sign-up period, and does not press to get more insurers into the market, more state marketplaces could collapse.

There is only one insurer offering coverage in 32 percent of the counties in the United States, which together include 21 percent of the nation’s population. In five states – Alabama, Alaska, Oklahoma, South Carolina, and Wyoming – there is only one insurer participating in the state’s marketplace. Jost says given the current political, regulatory, and financial uncertainty, there is a very real possibility that some counties may have no marketplace insurers for 2018.

Jost said insurers have been “on a rollercoaster” since Trump assumed office because of uncertainties about the fate of the Affordable Care Act.

But he said it is far from total collapse, despite GOP attackS on it. However, it’s health varies from market to market, with some states like California, which are strong supporters of the ACA, doing well and others like Oklahoma, “which has done everything to kill it,” not doing well at all.

After the failure of the GOP healthcare plan, Trump said he was open to working with Democrats on the issue.

Connecticut Sens. Richard Blumenthal and Chris Murphy seized the opening, as did 42 of their Senate Democratic colleagues, who signed a letter to the president saying, “We respectfully request that you abandon your efforts to repeal the Affordable Care Act (ACA) and undermine the U.S. health care system so that we can work together to improve the law and lower the cost of health care for all Americans.”

As a first step, the senators asked Trump to rescind his executive order to agencies on the ACA.

“While we would welcome your sincere interest in bipartisan work to improve quality, lower costs, and expand coverage, we are concerned by your recent statement indicating it would be a good thing to make the ACA “explode,” the senators said.