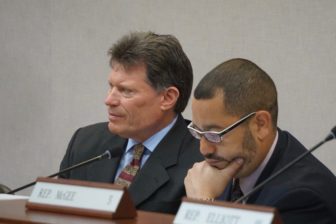 The Connecticut General Assembly’s appetite for gambling is being tested in every sense as legislators weigh competing proposals for casino expansion from MGM Resorts International and a partnership of the Mashantucket Pequot and Mohegan tribal nations.

Are legislators comfortable allowing the state’s first new casino since the Mohegan Sun opened on Oct. 12, 1996, and made rural southeastern Connecticut the unlikely home of two tribal casinos destined to become, at least for a time, the largest gambling resorts in the world?

If so, they face the same stomach-churning questions as any gambler confronting a big play: What is their tolerance for risk? What is the payout if they win? What are the consequences of a loss? What of doing nothing? And, perhaps, most importantly, do they even know the odds?

Legislators were reminded Monday during a public hearing of the Finance, Revenue and Bonding Committee that, other than a cautionary legal opinion from the attorney general, they are dependent on analyses provided by the competing interests.

Sen. John Fonfara, D-Hartford, co-chair of the finance panel, likened the status quo and the competing proposals for expansion to “a bird in the hand versus two in the bush. He said the choice “doesn’t leave a lot of people comfortable.”

A new report from a consultant hired by the tribes asserts that their proposal to jointly develop a casino off I-91 in East Windsor is the safest way to fight out-of-state competition that already has helped shrink the state’s share of tribal slots revenue from $407 million in 2007 to less than $270 million last year.

MGM insists the state could do better by inviting competitive bids for a casino in lower Fairfield County on the doorstep to the metropolitan New York market. 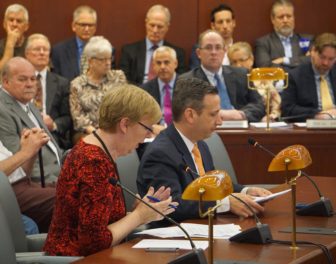 Senate Majority Leader Bob Duff, D-Norwalk, testified in strong support of the tribes’ request for exclusive rights to an East Windsor casino to preserve market share as MGM opens a gambling resort in nearby Springfield in 2018.

As has been the case since the early 1990s, when Gov. Lowell P. Weicker Jr. signed a deal granting the tribal casinos, Foxwoods and Mohegan Sun, exclusive rights to slots in return for 25 percent of the gross slots revenue, the tribes have an edge: Open competition would negate the deal that still produces more than $260 million in annual revenue sharing for the state.

An analysis by Clyde W. Barrow, a consultant hired by the Pequots and Mohegans, claims that a commercial casino in lower Fairfield County, assuming a tax of 25 percent on its gross revenues, would have to generate $1.063 billion in annual gaming revenue just to equal the lost revenue from the tribes. 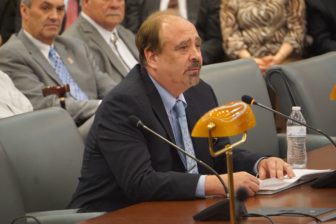 “The probability of a southwestern Connecticut casino generating $1.063 billion annually in gross gaming revenue is almost zero considering the fact that not a single commercial casino in the United States generates that level of gaming revenue,” Barrow said in a report.

Barrow said even if a major casino could quickly find a site in Fairfield County, its hold on the New York market would be fleeting: A moratorium on a casino in New York City expires in 2020, ensuring competition that would threaten the viability of a casino in Bridgeport or elsewhere in southwestern Connecticut.

“The numbers Clyde Barrow is putting forth in this effort to confuse the public are pure fantasy,” Clinton said. “The report’s conclusion is undermined by the tribes themselves, as they have repeatedly told their investors that the greatest threat to their two current casinos isn’t Springfield — it’s the casino market that could be accessed if there was a commercial casino in southwest Connecticut.” 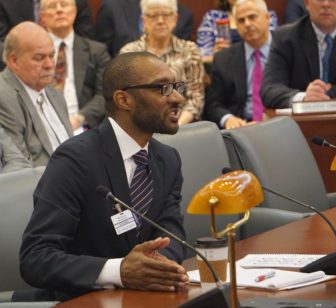 A bill outlining a competitive process assumes a 35 percent tax rate, not 25 percent.

But Barrow noted that a previous economic analysis produced by MGM estimated annual gross revenues of $721 million from a Fairfield County casino. Even at a tax of 35 percent, that would produce $252 million for the state — not quite breaking even with the state’s existing slots revenue.

Clinton countered with one of the cautions raised in the attorney general’s opinion: There is no guarantee that the Bureau of Indian Affairs would approve a new deal with continued sharing of the slots revenue.

The tribes say their East Windsor bill is contingent on the BIA reaffirming the old slots deal.

Meanwhile, another gambling interest was heard from Monday, one that doesn’t like either alternative as currently proposed.

Sportech, the operator of off-track betting in Connecticut, said its revenues are expected to decline by up to 21 percent  after MGM Springfield opens. The combination of MGM Springfield and an East Windsor casino could cost up to 35 percent of its revenue.

Frank J. Chesky III of Sportech told the committee it should consider steps to help its facilities stay in business, either by allowing them to offer slots or requiring casinos to share some revenue.