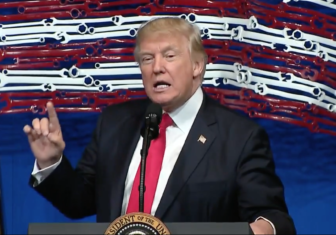 Washington – There’s at least one thing Sen. Chris Murphy, a frequent critic of Donald Trump, sees eye to eye on with the president – the need to close loopholes in laws that requires government agencies to “buy American.”

Trump on Tuesday signed an executive order that encourages government agencies to give priority to American companies when awarding contracts and ordered a review of waivers and exemptions that allow the use of foreign-made products.

“Today’s executive actions on Buy American laws are a big step in the right direction, and I’m glad President Trump included some of my ideas I sent over during his first week in office,” Murphy said in a statement. “I reached out to the White House because this is an area where I know President Trump and Democrats can work together.”

Murphy added that “spending tax dollars at home instead of overseas isn’t a partisan issue.”

Murphy ramped up his own “buy American” campaign last year in response to reports that Pentagon contracting personnel did not consistently comply with the Berry Amendment or the Buy American Act, two federal laws that require federal agencies to give preference in purchasing to domestic goods and raw materials.

Trump’s “buy American” stance was a key part of his campaign for the White House.

The executive order he signed at Snap-On Tools, a Kenosha, Wis., based manufacturer, also orders a review of the H-1B visa program for skilled workers, with the goal of reforming the program.

The “buy American” portion of the order directs federal agencies to conduct a “top-to-bottom performance review” of the use of waivers to the Berry Amendment and the Buy American Act and for stricter enforcement of laws pertaining to the use of U.S.-made iron and steel in projects supported by federal funds.