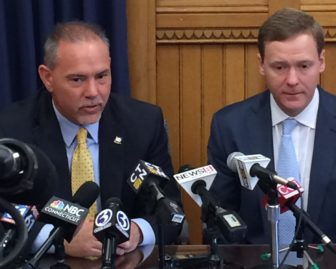 While insisting he remains very sensitive to the economic risks posed by another state income tax increase, House Speaker Joe Aresimowitz, D-Berlin, said Tuesday he would not rule out another hike — including one on wealthy households — given the massive deficits projected for state finances.

Aresimowicz also urged other lawmakers and Gov. Dannel P. Malloy to focus first on a plan to stabilize state finances over the long term.

“I still refuse to enter the negotiations taking anything off the table,” Aresimowicz said, noting that neither party nor branch of government has offered a plan to date that comes close to solving the budget crisis.

And state finances already were headed for a major shortfall in the coming biennium.

Based upon the latest numbers, state finances — unless adjusted — will run $2.2 billion, or more than 11 percent, in deficit in the 2017-18 fiscal year.

These are the largest potential gaps since the 18 percent potential shortfall Malloy and the legislature tackled in 2011.

Each of the projected deficits for the next two years is larger than the value of any single state tax except for the income and sales levies.

The $2.9 billion deficit in 2018-19 is larger than any line item in the entire state budget, surpassing such giants as Medicaid, debt service, pension fund contributions and the Education Cost Sharing grant program.

“As the hole in the budget grows, the options become more limited,” Aresimowicz said.

With that in mind, the speaker added, he couldn’t rule out income tax hikes on the wealthy or on the middle class at this point.

Noting that both he and Aresimowicz voted for income tax hikes to close major deficits in 2011 and 2015, House Majority Leader Matt Ritter, D-Hartford said, “I don’t wear it as a badge of honor.”

Given that history, Ritter added afterward, he would not consider an income tax hike unless the current revenue trends in this area improve.

But Aresimowitz added he wants to position Connecticut to grow when the budget process is complete, and that can’t happen if annual deficits recur year after year.

“Let’s make sure we’re not finding ourselves in this boat again,” Aresimowicz said.

Malloy, also a Democrat, has been urging lawmakers to make revenue a secondary solution to the budget crisis, letting spending cuts do the bulk of the work.

The governor also urged legislators this week to resist discussions of further income tax hikes on the wealthy, noting that Connecticut’s economy — and the state budget — are heavily reliant upon the financial services sector, and hedge funds in particular.

“Be careful what you’re saying about them,” he said. “This is an important industry.”

The bulk of the latest income tax erosion was tied not to paycheck withholding but to quarterly filings, most of which involve capital gains, dividends and other investment-related earnings.

According to the governor’s budget office, the state’s 100 largest income taxpayers paid 45 percent less this year than last.

The Finance, Revenue and Bonding Committee conducted a public hearing last week on a proposal to increase the top marginal rate on the income tax from 6.99 to 7.49 percent. But the panel did not recommend that hike, which would have applied to households earning more than $500,000 per year.