Barrios granted two-year stay, but his case is ‘an exception’ 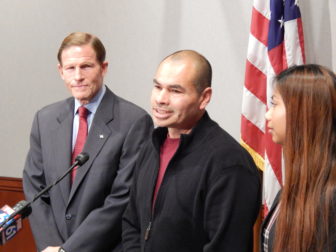 Federal immigration officials have granted Luis Barrios, a Guatemalan native who has spent decades living in Derby, a two-year stay of his deportation, giving him ample time to formally pursue asylum in the United States.

His reprieve may prove to be an outlier under new Trump administration deportation policies, however.

“Mr. Barrios’ case is an exception,” said Erin O’Neil Baker, the attorney representing Barrios. “Generally, you don’t even see a 30-day reprieve. And with this two-year reprieve, it’s pretty extraordinary.”

Barrios, who came to the United States as an undocumented immigrant in 1992 after fleeing violence in Guatemala, had been identified for deportation under new Trump administration policies. Federal officials were set to deport him on May 4, but he was granted a 30-day stay of the deportation the day before.

The news was announced at a press conference in Hartford organized by U.S. Sen. Richard Blumenthal, D-Conn., who has been one of Barrios’ strongest advocates.

While the latest reprieve is not permanent, it gives him “two years of unfettered relaxation” as he pursues asylum, O’Neil Baker said.

“Thank you, Sen. Blumenthal, my lawyer, Erin, and so many people behind us to help me about my case,” said Barrios, who was overcome by emotion while he spoke. “I’m very happy.”

“We’re really grateful and happy that we can be together as a family again,” said Jessica Barrios, his daughter, who is a U.S. citizen. “I’m honestly speechless for the news.”

Barrios has received support from numerous state and federal lawmakers in Connecticut, and his case has been widely covered in the media.

“I think it’s all of the community support and all of the efforts – the extreme efforts made by your office, Sen. Blumenthal – that brought us to this point,” O’Neil Baker said. “It just goes to show you this case has merit.”

Blumenthal said his staff made a “full-court press” to ensure Barrios would not be deported.

“I’m so glad that Luis knows that he can stay here at home with his wife and kids,” said U.S. Sen. Chris Murphy, D-Conn. “I’m happy Connecticut’s congressional delegation could act quickly and help.”

But while Barrios no longer faces imminent deportation, many others in Connecticut still do. Blumenthal called Trump’s new deportation policies – which overturned an Obama-era provision that put law-abiding people like Barios low on the priority list for deportation – a “deportation dragnet.”

“We don’t know how many others may be in a similar situation, or what the policy will be going forward,” Blumenthal said. “We’re going to take it one day and one case at a time.”