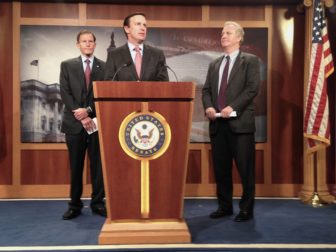 Washington – Connecticut’s Democratic senators, joined by a colleague from Maryland, on Thursday slammed the Trump administration for trying to “sabotage” the Affordable Care Act and demolish a health care system that has extended insurance coverage to millions of Americans.

Sen. Chris Van Hollen, D-Md., said the efforts to undermine the health insurance coverage of millions of American began on the day Trump was inaugurated, when the new president signed an executive order requiring federal agencies to “minimize the unwarranted economic and regulatory burdens” of the Affordable Care Act, which led the IRS to say it would no longer aggressively enforce penalties against those who fail to have insurance coverage.

He also said the Trump’s administration decisions to stop advertising to push enrollment in state exchanges and to shorten last year’s enrollment period were “a deliberate effort to sabotage the health care system.”

Aetna last week announced it would quit selling policies in all state exchanges and Anthem, one of two remaining insurers on Connecticut’s Access Health CT exchange (the other one being ConnectiCare), also has threatened to leave state exchanges — giving consumers fewer choices for coverage.

Access Health on Thursday extended the deadline, from July 1 to Sept. 1, to allow Anthem and ConnectiCare more time to decide whether to continue selling policies on the exchange.

He accused Trump of “peddling false news and falsehoods…designed to destroy the ACA.”

Trump has said Obamacare is “exploding,” with fewer choices and higher premiums for consumers. Insurers requesting rate increases from state insurance departments are asking for hefty boosts in premiums.

House Speaker Paul Ryan, R-Wis., pointed to Maryland Blue Cross/Blue Shield’s request for a 50 percent rate hike as evidence the ACA needs to be repealed and replaced by a GOP plan the U.S. House approved on May 4 .

Murphy said the Trump administration has a “systematic, planned” assault on the ACA that includes failure to commit to continuing cost-sharing payments to insurers that subsidize co-payments and deductibles for low-income Americans. Several insurers, including Anthem, say they will quit state exchanges if these payments are not secured, but Trump has committed to making them only through May.

Murphy said the tactic is “cunning,” creating uncertainty for insurers while stopping short of taking a step that would put the Trump administration at fault for destroying the ACA.

‘If you are an insurer, how the heck can you price a product with this uncertainty?” Murphy asked.

A group of 13 GOP senators are trying to craft an alternative to the House GOP health care plan, called the American Health Insurance Act.

Murphy said the Trump administration and congressional Republicans are working to undermine the ACA and “rooting for its failure,” but “there’s a good chance that efforts to repeal (and replace) the ACA will crater.”