Homelessness declines in Connecticut for third year in a row 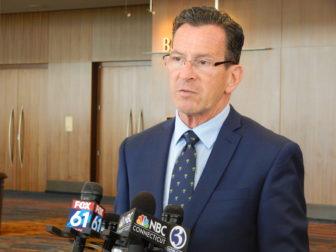 Gov. Dannel P. Malloy comments on the decline in homelessness.

The state’s homeless population declined by 13 percent over the past year, the Connecticut Coalition to End Homelessness said Thursday.

Homelessness in Connecticut now has declined for three straight years, according to data from the coalition’s annual study.

The number of people experiencing homelessness is at its lowest since the study began in 2007 – a benchmark also achieved in the last two years. It has declined 24 percent statewide since 2007.

Gov. Dannel P. Malloy, who celebrated the findings at the Connecticut Convention Center Thursday, said no state is doing more than Connecticut to address homelessness.

“I live in a state where people have a hard time celebrating anything,” Malloy said. “But being the leading state in ending homelessness amongst veterans, amongst chronically homeless individuals and now, quite frankly, amongst the general population of homeless individuals is something that is worthy of celebration. And I’m very proud of what we’ve done here in the state of Connecticut.”

The coalition’s study uses a “point-in-time” count, which indicates how many people are experiencing homelessness on one particular night of the year. It found that 3,387 people were homeless on the 2017 survey date, Jan. 24. That is down from 4,482 people when the survey was first conducted in 2007, and also down from its all-time high of 4,627 people in 2008. 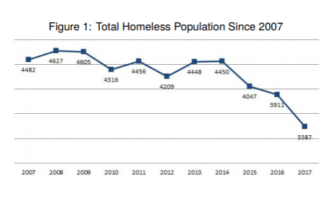 Homelessness has declined significantly over the past three years.

Malloy said he expects the trend to continue despite the state’s budgetary woes. He said the state’s Housing Department is “small and efficiently run.”

“During Gov. Malloy’s tenure, Connecticut has become a recognized national leader in the housing arena,” Housing Commissioner Evonne Klein said in a statement.

“This year’s point-in-time count reaffirms not only the state’s commitment to preventing and ending homelessness, but also the strong partnerships. I applaud our nonprofit housing providers for their dedication and commitment. Together, we’re building a Connecticut where everyone will have a place to call home,” she added.

Last year, the federal government certified Connecticut as having ended homelessness among veterans – only the second state to have done so at the time. In January, Malloy announced that the state nearly had ended chronic homelessness as well, matching every known chronically homeless person to housing.