Will Republicans save bill allowing college aid for undocumented youth?

It seemed like a critical blow for the undocumented immigrants seeking access to the $165 million pot of financial aid at public colleges: House Speaker Joe Aresimowicz disclosed that Democrats don’t have the votes to pass the bill.

“We did vote-count it. It has support in the House. Currently, it’s a few votes short,” the Democrat from Berlin told reporters Thursday.

But 15 minutes later, the so-called “Dreamers” – advocates pushing for the legislation to pass – were holding a previously scheduled press conference down the hall from the House chamber with some unexpected allies: Republicans. 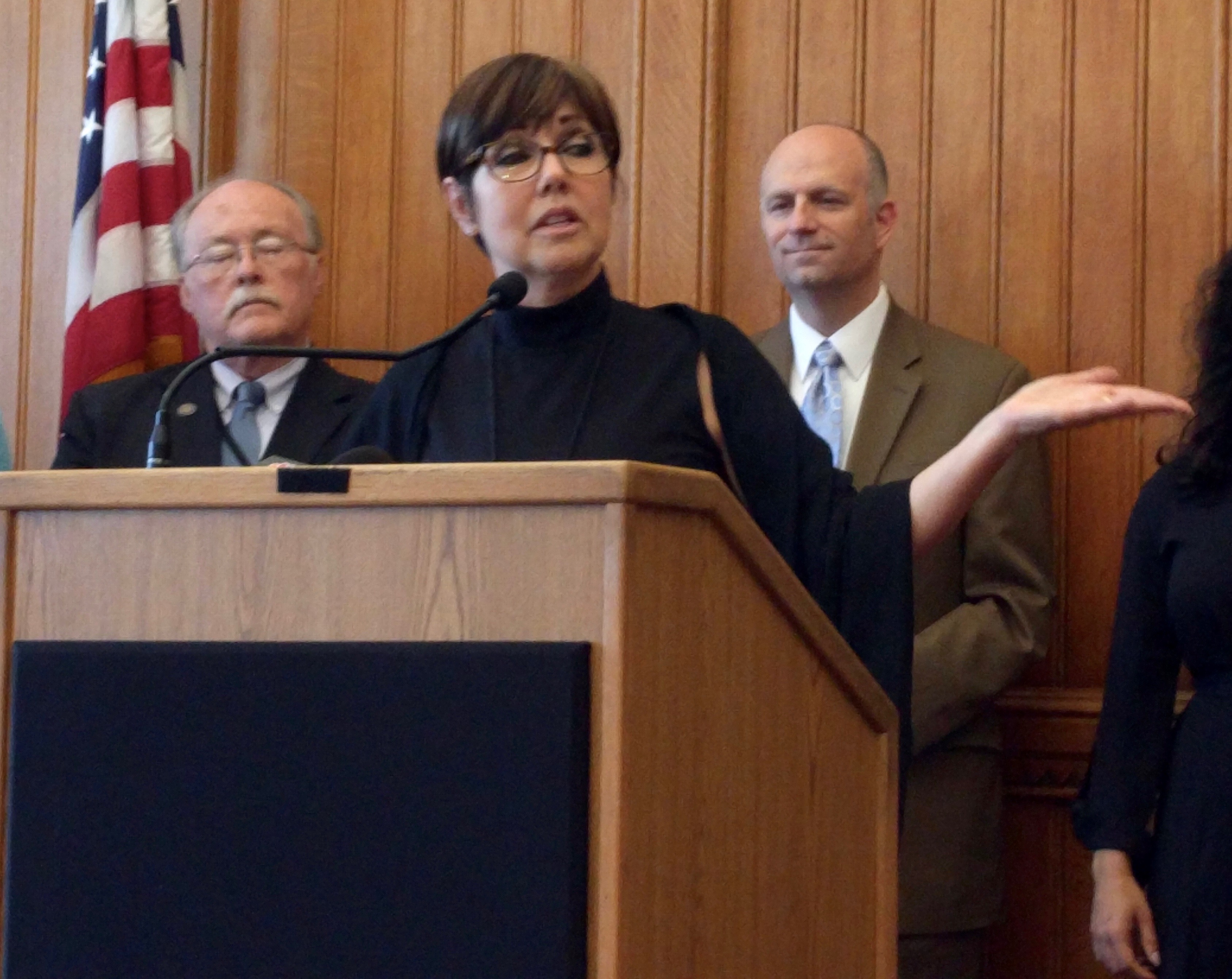 Rep. Pam Staneski, a Repubclian. Behind her is Rep. Tim LeGeyt, a Republican, and Rep. Haddad, a Democrat, all supporters of allowing undocumented students access to financial aid.

“It is that fairness piece,” said Rep. Pam Staneski, the ranking Republican on the legislature’s Higher Education Committee. “I have no problem saying I struggled with this concept, and part of it was because I did not understand it.”

The legislation would make undocumented students eligible to apply for aid from the $165 million pool that the state’s public college systems collectively provide. Funding for financial aid comes from setting aside a portion of student tuition dollars for students from low-income families, as state law requires.

“If you are paying into this, then you ought to be a part of the pool that is considered [for aid],” Staneski said. “The myth out there is that all these students who are undocumented are going to take all of this money for institutional aid – and they’re not, because it’s a blind selection.”

Staneski then turned to the undocumented students at the press conference, “I wish you guys luck and you have my support.”

Standing behind Staneski as she spoke during the press conference, shaking his head in agreement, was Rep. Timothy LeGeyt, a Republican from Canton, as well as several Democratic state representatives.

Democrats hold a slim 79-72 majority in the House and can spare just four votes and still get legislation passed out of their chamber. 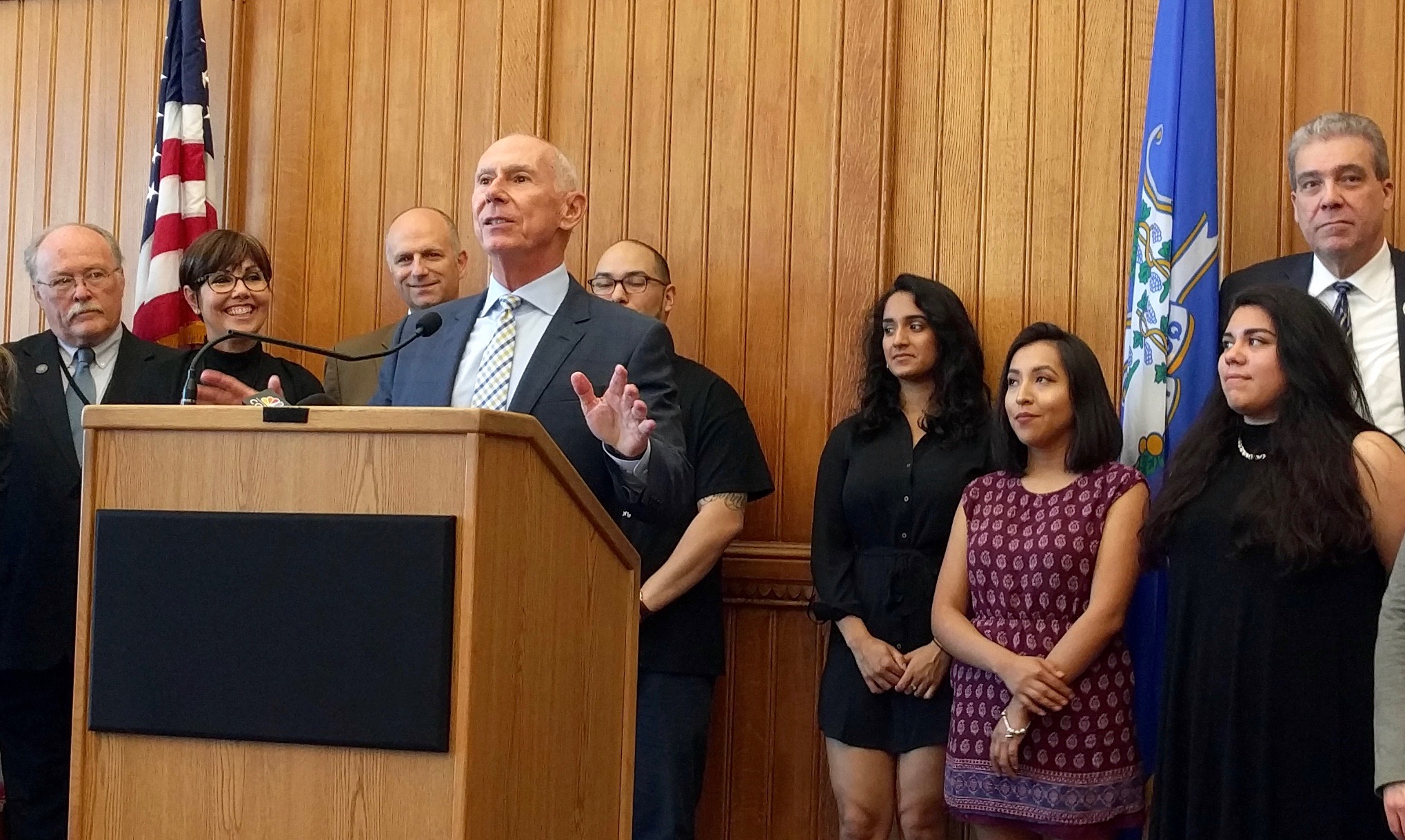 CSCU President Mark Ojakian speaks in support of the bill. Behind him are students and Republican and Democratic legislators.

With Democrats unable to rally the necessary votes in their caucus, it may be up to the Dreamers to land enough Republican votes to get the bill out of the House. The state Senate has passed similar legislation the last three years but the House has failed to take action.

There are Republicans in addition to LeGeyt and Staneski who support the bill.

“I think if we admit them, then we should treat them the same as any other student. If you are a student, you are a student,” Rep Livvy Floren, R-Greenwich, said during an interview Thursday. “It is a matter of parity and equity, and I support it.”

House Minority Leader Themis Klarides, R-Derby, said it is unfair to require undocumented students to pay 15 percent of their tuition toward financial aid they are not able to receive.

The bill has the support of the presidents of both of the state’s public college systems, the University of Connecticut and the Connecticut State Colleges and Universities.

It’s unclear whether Democrats who control the calendar will bring the bill out for a vote without having enough votes in their own caucus. Typically only bills that Democrats know they have enough votes to pass are raised.

“We’ll see what happens with it in the coming week or so,” Aresimowicz said of the financial aid bill. “The reality is we have about a week and a half to two weeks to pass our big bills. After that we are up against the calendar and the clock, and Republicans have a say-so in the agenda.”

Students will be tested, masks will be mandatory, and there will be fewer people on campus.

by Adria Watson and Paul Stern

Local leaders want the governor to give them the authority to limit the size of public gatherings to 25 people.

Four of the students are living on campus this semester, while the other three are commuting to classes.