Himes: Trump ‘is not acting like an innocent party’ 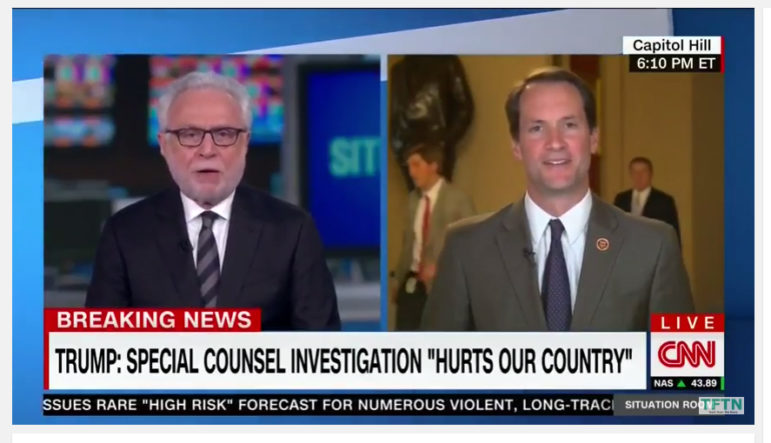 Washington – Rep. Jim Himes’  job as a minority member of the House Intelligence Committee usually wasn’t a path to the political spotlight – but all that changed with the election of Donald Trump and allegations his campaign may have colluded with the Russians to influence U.S. elections.

Now Himes is a regular on CNN, MSNBC and other television networks, valued because he voices Democratic concerns about the Russia probe — which Trump derides as a “witch hunt — with a minimum of partisan histrionics.

The House Intelligence Committee, along with its counterpart in the Senate, took the lead in Congress’s investigation of Russian meddling in American politics. But Congress’s involvement in the probe is spreading – the House Oversight Committee and the Senate Judiciary Committee have begun their own investigations. Congressional investigators are seeking documents and information from Trump consultant Roger Stone, former campaign manager Paul Manafort, former NSA chief Michael Kelly and others.

The panels looking into whether the Trump campaign colluded with Russia expanded their reach this week and are now also investigating the circumstances under which Trump fired former FBI Director James Comey.

The House Intelligence Committee has had its own share of controversy. Former Chairman Devon Nunes, a California Republican, was forced to step aside after he was accused of disclosing classified information to someone at the White House and then telling the President and reporters about it before members of his own committee. Himes called Nunes’ behavior “loopy” and “bizarre.”

The Justice Department’s appointment of Robert Mueller as special counsel to look into the Russia allegations may sideline some of the work of congressional investigators like Himes. But the congressional panels say they are going to intensify their work next week and Comey will soon appear before the Senate Intelligence Committee.

In an interview with the Connecticut Mirror, Himes said he and his panel still have a role to play in the effort to “dispel the cloud of suspicion” that has engulfed the Trump administration.

Where do you see the House Intelligence Committee investigation going?

We’re making good progress on the investigation, especially since Mike Conaway has taken the lead on the Republican side. There was a two-week period there where everything came to a stop because of Chairman Nunes’ back and forth with the White House. But Mike Conaway is a good, fair-minded guy. We’re reviewing lots of documents, which is awkward because you just can’t review them anywhere.

And now there’s a special counsel looking into the Russia probe, too.

I’m just thrilled with Bob Mueller’s appointment as independent counsel at Justice. Even though the two investigations are separate, I was worried that a very dangerous signal had been sent to the investigators at the FBI with the firing of Jim Comey, and that has been absolutely repaired with the appointment of Bob Mueller.

We’re closely coordinating with the Senate [Intelligence Committee]. We obviously know who they are interviewing and what documents they have, and we’re making sure that we’re working in parallel and in a complementary way if we can.

The FBI has probably dozens of investigators on this 24-7. So it’s likely they’ll have a lot more information on this than we do. We’ll try to make sure we have access to everything they do. But you know, because it’s a DOJ investigation, they keep it under wraps. It’s not like the comity we’ve achieved between the House and Senate.

There’s really only one goal, which is to get to the truth about these many allegations that are out there. Whether it’s (former NSA chief) Michael Flynn’s contacts with the Russians. We need to put to rest allegations about Donald Trump’s contacts with the Russians. They may have been innocent contacts; they may not. But we’ve got to dispel the cloud of suspicion, either by finding something prosecutable or by finding something that is innocent. Really the objective here is to get at the truth and to get these incredibly damaging allegations off the table.

Do you have a timetable for the investigation?

How do all these investigations impact legislation, and especially anything that comes over to Congress from the White House?

The most damaging thing to legislative progress is the summary firing of Jim Comey and three separate explanations to why he was fired. That brings the Congress to a halt. Things like tweets criticizing the investigation by the president are inappropriate. They sort of consume bandwidth on Capitol Hill. And so, I’ve said it before, legislative progress has been stopped, not so much by the investigation, but by the president’s refusal to be constructive about the investigation. This is one of the most challenging things.

If everything were totally innocent, the president would be smart to say “come on in, look at the files, interview the people and let’s move on.” Instead he’s called it fake news; he’s fired the lead investigator. He’s not acting like an innocent party. That doesn’t mean he’s guilty, but he’s not acting like an innocent party. [Senate Majority Leader] Mitch McConnell, who I don’t usually quote, said it best, “We need a little less drama from the White House.”

How does your job on the Intelligence Committee affect your ability to do a job as a congressman and help your constituents? This is taking up hours and hours and hours every week…

In my perfect world, we would be doing what the president promised and we would be working on a $1 trillion infrastructure plan. What he promised and what is my No. 1 in-district priority for Connecticut are exactly the same thing.

So there’s a whole, beautiful alternative universe where President Trump says, ‘Let’s heal some of the divisions of this election by doing a great, bipartisan infrastructure bill. Instead, we went to the religious war that is health care. You are never going to generate bipartisanship with a health care bill, but that’s sadly where he went.