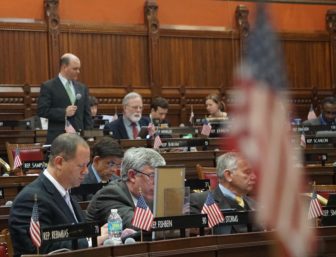 If early voting comes to Connecticut, it will be late — following at 37 other states and the District of Columbia. A sharply divided House of Representatives took a small step Tuesday toward putting the issue to a referendum vote, though not before 2020.

The House voted 78 to 70, with two Republicans joining 76 Democrats, for a resolution authorizing a referendum on a constitutional amendment allowing early voting. Connecticut is a rarity: The terms for casting ballots early or by absentee ballot is dictated by the constitution.

If passed by the Senate, the road to change still is long and uncertain.

The General Assembly elected in 2018 would have to vote in 2019 for the same resolution if voters get to have their say in 2020. Even if approved at referendum, the constitutional amendment only would allow legislators to consider a bill permitting early voting in the 2021 session.

So, if all goes well, the Land of Steady Habits could join the majority of U.S. states in allowing more than a single day of voting in time for the gubernatorial election of 2022 or the presidential election of 2024.

“Life is chaotic, kind of like this chamber is at times,” said House Majority Leader Matt Ritter, D-Hartford. “And we make it as hard any state in the country to vote to exercise your constitutional right. That is the bottom line.”

Republicans called the early voting unnecessary and an added expense to municipalities.

“I am very loathe to open the door to that kind of burden,” said Rep. Holly Cheeseman, R-East Lyme.

Cheeseman said she found research on early voting showing it does little or nothing to increase voter turnout.

Academic research has been mixed.

A University of Wisconsin study found that in-person absentee voting, as early voting is considered in some states, actually depressed turnout, while a Reed College study reported, “In general, the research concludes that convenience voting has a small but statistically significant impact on turnout, with most estimates of the increase in the 2 percent to 4 percent range.”

The issue has been partisan throughout much of the U.S., because the use of early voting is uneven.

“Other studies have shown that in-person absentee voting has boosted black turnout, in part because some states allow people to submit votes on the weekend,” according to Pro Publica. “This has enabled African-American churches’ “Souls to the Polls” initiatives, in which churchgoers are transported straight from the pews to the ballot box.”

The proposed constitutional amendment in Connecticut would allow the legislature to permit up to five days of early voting, either consecutive or scattered. One option would be to allow voting on the two weekends prior to election day, said Rep. Daniel J. Fox, D-Stamford, the co-chair of the Government Administration and Elections Committee.

The Republicans voting for the resolution were Livvy Floren of Greenwich and Devin R. Carney of Old Saybrook.

On a party-line vote, the Democrats rejected a GOP proposal that would have expanded the constitutional amendment so that photo identification would be required in the state constitution.