Murphy trying to block Saudi arms sale, but not the part benefiting Sikorsky 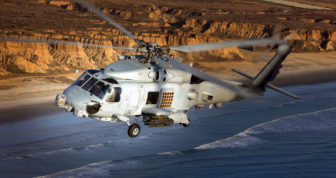 Washington – Sen. Chris Murphy has teamed up with Sen. Rand Paul to try to block part of a proposed $110 billion arms sale to Saudi Arabia, but not the portion that would benefit Sikorsky.

The senators on Thursday introduced a joint resolution of disapproval to force the U.S. Senate to vote on a resolution blocking a portion of weapons sales. They are using a  1976 law that allows any senator to force a vote on halting overseas arms sales.

Murphy said he wants to block about $500 million of the sale President Donald Trump announced last week as he was visiting Saudi Arabia — the part of the proposal that includes offensive weapons, including precision-guided munitions.

Humanitarian groups say weapons in the new Trump-backed sales are likely to be used against rebel factions in Yemen that the Saudi government sees as aligned with Iran. But those strikes often target civilians, Murphy and other critics of the sale say.

“Saudis…continue to target civilians, and Yemenis are being turned against the United States,” Murphy said on a press call with Paul on Thursday.

Murphy said Yemenis are being “radicalized” by the Saudi strikes, and the proposed armed sales would “give more space for ISIS and Al Qaeda to grow” in that nation.

Besides those 63 aircraft, the Saudis are very intersted in additional Black Hawks that would be purchased through a joint venture with Sikorsky and parent company Lockheed Martin. This joint venture involves “Black Hawks in a box,” or kits to make helicopters that would be assembled in Saudi Arabia but constructed in the United States.

The Saudi deal has been in the works for some time, but the Trump administration pushed hard to finalize it.

In September, former President Obama approved a more than $115 billion arms deal with the Saudis. But as civilian deaths and reports of human rights violations in the Saudi-led war on Yemen increased, Obama stripped offensive weapons like precision-guided munitions from the sale.

But he said Trump put no conditions on the sale.

Last year, Murphy and Paul tried to halt Obama’s efforts to sell arms to the Saudis. But that resolution was defeated on a 71-27 vote.

“I expect to have significantly more support,” for the latest resolution, Murphy said.

But he conceded, “I don’t know if we will have the votes” required to stop the sale.