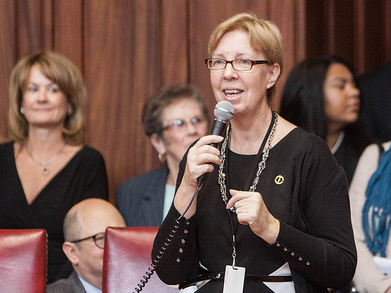 The Senate unanimously approved a plan Tuesday evening to cover the $317 million state deficit in the current fiscal year — albeit by draining most of Connecticut’s modest emergency reserve.

The mitigation plan, which now heads to the House of Representatives, does avert several controversial proposals from Gov. Dannel P. Malloy, including last-minute cuts to municipal grants, hospitals and state parks.

But the plan would sweep a total of $300,000 from two funds tied to the pistol and ammunition permitting process, raising legal concerns among some legislators.

The mitigation effort effectively concedes Connecticut will finish its third successive fiscal year in deficit. It also would leave just $29.2 million in the emergency reserve, an amount equal to less than one-sixth of 1 percent of annual operating costs.

The governor has limited statutory authority to reduce spending unilaterally, and he used rescissions to reduce the projected shortfall over the past two weeks to $317 million.

Malloy asked lawmakers to take several other steps, including:

These steps would bring the deficit down to slightly more than $200 million — the rest of which would be covered under Malloy’s plan by drawing down most of the $235.6 million Connecticut holds in its rainy day fund.

The Senate adopted a modified plan that also relies on the rainy day fund but restores funds for municipal aid, hospitals and state parks — largely replacing those moves with additional sweeps of one-time or limited resources from special accounts and funds.

“It is encouraging that the Senate has heeded the call for passing a deficit mitigation package alongside a deficiency bill,” Malloy spokeswoman Kelly Donnelly said. “The sooner we are able to balance the current fiscal year, the sooner we can turn our full, collective attention to developing and adopting a responsible biennium budget that delivers more predictability and stability for Connecticut taxpayers, businesses and municipalities.”

The bill is expected to draw concerns from some House members because of the sweeps related to firearm and ammunition permit fees. Those funds are used to process background checks and support technical upgrades related to that work.

But Sen. Cathy Osten of Sprague, Senate Democratic chair of the Appropriations Committee, said the funds are being drawn from surplus resources, and are not coming at the expense of any work scheduled to be undertaken this fiscal year.

In other business, Tuesday, the Senate also took final action on a bill to cover certain programs likely to overspend their allotted budgets this fiscal year, including a popular developmental program for young children.

The “deficiency” bill, which the House of Representatives adopted last week and now heads to Malloy’s desk, would cover additional spending needs totaling about $19.5 million, including:

To cover these needs, lawmakers would redirect $19.5 million in projected surplus funds from a fringe benefits account.

Osten praised lawmakers from both parties for adopting the measure and particularly for covering the needs of the Birth-to-Three program.

“I appreciate working on a bipartisan basis,” Osten said.