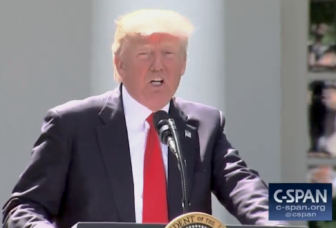 President Trump announces the U.S. withdrawal from the Paris climate-change accord in the White House Rose Garden.

Washington – Connecticut environmental groups and the state’s Democrats decried President Donald Trump’s decision to pull the United States out of the Paris agreement on climate change and vowed to keep up their efforts in the state to cut greenhouse gases blamed for global warming.

“It will result in making America weaker,” said Chris Phelps, state director of Environment Connecticut. “It will harm and undercut the livelihoods of American workers and clean energy industries. And it will threaten the long-term future of our nation and the lives of millions of people around the world.”

Gov. Dannel P. Malloy, speaking to reporters on a conference call arranged by the Democratic Governors Association, said, “Our president effectively signed the death warrants of individuals who will die because we will not make progress on climate change.”

“Yes, I am saying that our withdrawal from this agreement will do so much harm that hundreds of thousands of people will die,” Malloy said.

At a press conference in Hartford Thursday, Phelps and others condemned Trump’s decision. Some said the state will take an economic hit, as federal policy shifts from support of clean and renewable energy sources to backing fossil fuel industries, like coal.

John Humphries, organizer of the Connecticut Roundtable on Climate and Jobs, said the renewable energy industry has created “tens of thousands” of jobs in the state.

Connecticut is a leader in the fuel cell industry and is also home to manufacturers of components for the wind and solar industries.

“We don’t have oil wells,” Blumenthal said. “We don’t have coal mines. What we have is fuel cell manufacturing, as well as solar and wind potential. … Our economic future is tied to solving climate change.”

Trump on Thursday said the Paris accord, signed in 2015 by more than 190 nations in the French capital, is a bad deal for the United States and it won’t rejoin the pact unless terms are renegotiated.  Before Trump’s announcement, only war-torn Syria and Nicaragua, which said the accord was not tough enough – were the only non-signatories of the accord.

“In order to fulfill my solemn duty to protect America and its citizens, the United States will withdraw from the Paris climate accord but begin negotiations to reenter either the Paris accord or an entirely new transaction under terms that are fair to the United States,” Trump said from the White House Rose Garden. “We’re getting out.” 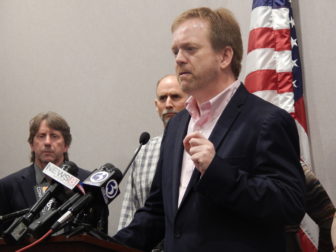 In a rambling speech, Trump said the United States is being taken advantage of by the Paris agreement, and that it hobbled the nation’s ability to fully exploit its reserves of fossil fuel energy.

“We don’t want other leaders and other countries laughing at us,” Trump said. “I was selected to represent citizens of Pittsburgh not Paris.”

“The Paris climate agreement was simply a raw deal for America,” he said. “Signed by President Obama without Senate ratification, it would have driven up the cost of energy, hitting middle-class and low-income Americans the hardest.”

But critics of the move say the exit from the pact would raise doubts about U.S. commitments to fighting global warming and make it more difficult for other nations to keep their environmental commitments.

“The president’s decision to withdraw from the Paris Climate Accord is a mistake for American jobs, American innovation, American leadership in the world, and the future of the planet,” said Rep. Elizabeth Esty, D-5th District.

Sen. Chris Murphy, D-Conn., tweeted, “Dear planet, we’re sorry. Please just hang on for three and a half more years and we’ll fix this. We promise.”

Rep. Rosa DeLauro, D-3rd District, said “with this decision, President Trump and his climate-denying advisors continue their assault on science and the environment.”

Blumenthal disputed Trump’s claim that withdrawing from the agreement would create jobs in the coal industry, saying those jobs are “not coming back.”

State will go it alone

Connecticut’s environmental groups said the state – and other like-minded states – now will have to take the lead in promoting clean energy and curbing emissions. 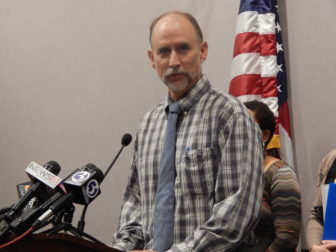 John Humphries, organizer of the Connecticut Roundtable on Climate and Jobs and a member of the Governor’s Council on Climate Change

“These are problems that are only getting worse as climate change gets worse,” he said.

Humphries said the state has committed to an 80 percent reduction in greenhouse gas emissions by 2050.

“Mr. Trump’s retreat does not change the necessity of achieving that goal,” he said.

Malloy promised to continue the state’s drive to cut emissions.

“For our part, in Connecticut we will continue building on our efforts to address climate change with common sense, practical initiatives that will help to build and grow our economy,” Malloy said. “Unfortunately, we lack a strong partner at the federal level as we go about this incredibly important work.”