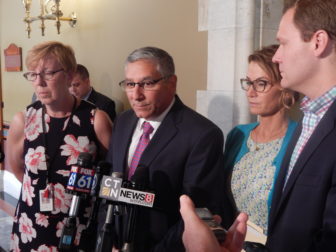 Talks between Gov. Dannel P. Malloy and legislative leaders are growing testy as Connecticut inches closer to a June 30 deadline to craft a budget for the next two fiscal years.

The tension was on full display Tuesday. After an hourlong budget meeting with the governor, four top lawmakers answered only a handful of questions outside Malloy’s office before all but one of them abruptly walked out of the news conference.

The only leader to remain was Senate Republican President Pro Tem Len Fasano, R-North Haven, and he painted a grim picture of the negotiations.

“My gut reaction is we are going to get past July 1” without a budget, Fasano said.

Malloy, in a separate news conference afterward, only guaranteed “progress” by that deadline, though he said he remains hopeful a deal can be reached before then.

With 18 days remaining until the deadline, Malloy faces the prospect of running state government without a budget if lawmakers are unable to reach an agreement. He said he plans to release “principles” next week that would illustrate how the state would operate beginning July 1.

Shortly before the news conference broke down, Osten moved to cut off Fasano while he was answering a question, prompting Fasano to respond with a firm, “Let me finish.” She leaned back and shook her head.

Malloy, when asked whether the mood was similar behind closed doors, offered a metaphor.

Malloy and the Senate Republicans have offered separate line-by-line budgets to close the deficit. The House Republicans and legislative Democrats have put forward budget outlines as well.

One of the primary hurdles in the talks, Fasano said, is that legislative Democrats have not presented a line-by-line budget to be discussed. Malloy said he expects them to offer details in the near future.

Most notably, the governor’s budget and the Democrats’ outline rely on $1.5 billion in labor concessions over the next two years. The Republicans are asking for more labor savings.

Malloy and union leaders have reached a tentative framework to achieve savings of $701 million in the first year and $869 million in the second – but a provision of the agreement extends the benefits contract an additional five years, from 2022 to 2027. 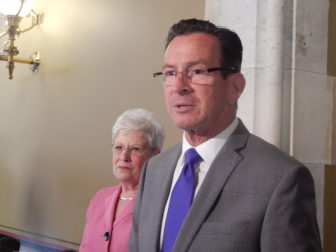 Republicans have objected, saying the savings is not enough and the five-year extension is not acceptable. With a narrow 79-72 majority in the House and an 18-18 tie in the Senate, Democrats would need near-unanimity to pass any budget over united Republican resistance.

Fasano and the Senate Republicans have proposed an alternative to the labor concessions, calling for statutory changes they initially said would produce $2.2 billion in labor savings over the biennium.

The savings target was adjusted down to about $1.95 billion – $836.9 million next year and $1.08 billion the following year – after a provision that would shift overtime to compensatory time for all state employees was narrowed to exclude police and correction officers.

Malloy said last week he would veto all the existing legislative budget proposals.