If no new state budget is in place by Saturday, Connecticut will be on a path to overspend its resources by an average of  nearly $200 million per month.

And with less than $130 million in the emergency reserve, that’s a problem.

Gov. Dannel P. Malloy will be asked, starting Saturday, to avert that catastrophe, preserve essential services, cover escalating debt payments and distribute aid to municipalities — without the tax and fee increases that could be included in a new budget.

Malloy’s budget director told The Mirror on Friday that can be done — for a while — but not without significant sacrifice, including cutbacks in programs for the needy and disabled, and in payments to towns.

“We have so many very, very important things on our plate,” Office of Policy and Management Secretary Ben Barnes said. “We’re going to have to balance them and I think all of them are going to end up being done — certainly in a no-budget scenario — in ways that fall short of our hopes and aspirations.”

When the new fiscal year begins Saturday, Connecticut will owe hundreds of millions of dollars more for things like:

And none of these extra costs goes down by one penny just because there is no new budget.

“So just going on autopilot makes our problem $150 million to $200 million a month worse,” Barnes said. “We really have very limited ability to keep doing what we are doing and still solve our budget problem.”

“We’re already in austerity mode,” Barnes said. The administration began planning for this scenario months ago as it became clear legislators were gridlocked over how to close projected deficits that total $5.1 billion over the next two fiscal years combined.

And given that the state expects to finish $107 million in deficit in the outgoing year — it’s third shortfall in three years — the rainy day fund will have less than $130 million left after covering that shortfall.

Once that’s gone, Connecticut would have to borrow to cover operating costs, and it still hasn’t paid off its operating debt from the 2009 recession.

“When you total up all of the things that we really must do, the fixed-cost growth that we have built into our budget, and if you factor in employees’ salaries, we would have to cut 15 to 17 percent out of everything else,” Barnes said.

But he quickly added, “We really can’t do it across the board.”

Labor unions are expected to vote next month on a concessions package worth almost $1.6 billion over the next two fiscal years combined. Barnes conceded it would be hard to get workers to vote for that deal if the administration is laying off employees now.

“We need to honor our pending labor agreement until such time as it is accepted and ratified,” he said. “If it is not, we can consider other alternatives.”

Local aid can be prioritized, but not spared

Municipal aid and contracts with private social service agencies are two of the biggest pots of money not tied directly to the concessions deal.

But they also are two of the administration’s highest priorities.

Still, something has to give, and Barnes said neither can be spared from cutbacks.

“I don’t believe there is a way for us to do that along with meeting our (fixed-cost) responsibilities,” the budget director said. 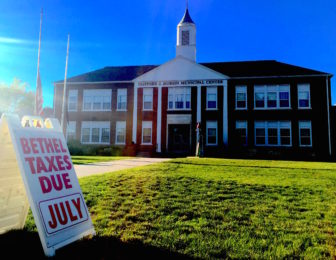 A sign outside Bethel town hall reminds residents that taxes are due.

Connecticut currently provides about $3 billion in major statutory grants to cities and towns, and two-thirds of that involves the Education Cost Sharing grant awarded to all school districts.

“At the end of the day, the governor and I see the biggest challenge that we need to consider with municipal aid is our constitutional requirement to provide free public schools,” Barnes said, adding that Connecticut particularly is failing its poorest districts.

While the distribution plan for the ECS program expires on June 30, Barnes said the administration believes if must continue the program — even absent a budget — to meet the constitutional mandate.

But given the requirement to preserve other essential services, and the lack of available funds, he also said the administration could not guarantee ECS grants wouldn’t be scaled back.

The initial payment on those grants isn’t made until September 30, and a determination probably won’t be made until closer to that date — if the new budget isn’t resolved, he said.

Barnes provided even less reassurance when it came to non-education aid.

Connecticut provided $182 million this year to offset some of the revenue communities lose because they cannot tax property owned by the state, or by nonprofit colleges and hospitals.

But the law also says those grants are distributed each September “within available appropriations.”

Similarly, the system used to distribute more than $170 million in sales tax receipts to cities and towns this year also expires on June 30.

Barnes said this doesn’t mean all non-education aid must be eliminated absent a new budget.

But the imperative to avoid amassing hundreds of millions of dollars of new operating debt each month could significantly curtail what is available if a budget standoff drags on into the fall.

“We need to produce enormous savings and we need to change the amount of money that is going out the door every day in order to not make the problem worse,” he said.

Connecticut spends another $1.3 billion each year hiring community-based nonprofit agencies to provide the majority of social services offered to the disabled, the mentally ill, abused children, the poor and others.

“Clearly the work that both state employees and nonprofits do in the human services area is critical,” Barnes said.

And while the administration won’t order layoffs while the concessions deal is pending, it will freeze vacant state jobs of all types and reduce consulting, legal and service contracts.

Unfortunately, Barnes said, that also must include contracts with nonprofits that serve the most vulnerable, though the goal will be to trim funding — not to eliminate programs entirely.

Gian-Carl Casa, president and CEO of the CT Community Nonprofit Alliance, said last week that lawmakers could make the task of closing projected budget deficits easier by turning more work over to the private sector.

“Using community-based nonprofits to deliver more human services can save more than $300 million over the biennium — funds that can be used to maintain vital services for our neighbors, families and friends,” Casa said. “We urge legislative leaders and the governor to act boldly … and combine the ways they convert services to community nonprofits. The only way out of this budget crisis is to do things differently.”

Many of those nonprofits’ contracts with the state are renewed during the summer.

And while some cutbacks could be ordered at that time, Barnes said the state always has the option to restore cuts if additional funding is included in a new, adopted budget.

“We’re certainly doing our best to think about how we balance those and try to live to fight another day,” he said. “We hope the legislature comes into town and passes a budget that rightfully makes those policy decisions through our elected process.”