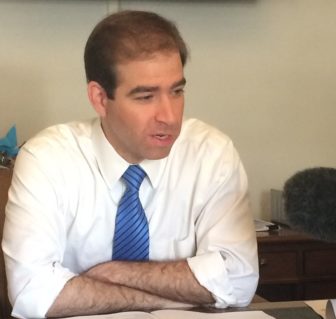 Hartford Mayor Luke Bronin announced Thursday his administration has hired an international law firm specializing in financial restructuring as he nears a decision on whether to pursue bankruptcy.

Bronin engaged Greenberg Traurig LLP to evaluate the capital city’s restructuring options. The firm’s team will be led by Nancy A. Mitchell, one of the co-chairs of its restructuring practice.

“Nancy Mitchell and the team at Greenberg Traurig have extensive experience in municipal restructuring, and they will be working with us to examine all options for putting the City of Hartford on a sustainable path,” Bronin said.

“Over the past eighteen months, we have made significant cuts and we continue to pursue aggressive changes in our labor contracts,” the mayor added. “We have also advocated for a state budget that puts our cities in a position to be strong and vibrant, for the sake of Connecticut’s economic competitiveness.”

Bronin has said city finances, unless adjusted would run about $65 million in deficit in the new fiscal year, which began July 1.

Three major insurance companies based in Hartford have pledged to provide $10 million in annual assistance over the next five years — provided that is part of larger state-local plan to stabilize the city’s finances and put Hartford on a path to growth.

The mayor’s plan to close the shortfall also hinges on additional worker concessions, deep cuts to community programs and transit services, and continued reduction of the workforce through attrition.

And Bronin has asked Gov. Dannel P. Malloy and the General Assembly to provide Hartford at least with another $40 million in state aid this fiscal year.

But legislators have been gridlocked over how to solve an imposing deficit in state finances, and it is unclear whether Hartford will get those extra funds.

All of the state budget proposals offered to date, eliminate previously approved increases in municipal aid and also reduce overall local grants — in varying amounts — compared with those provided in the just-completed fiscal aid.

And if the state continues weeks or months into the new fiscal year without its own budget, Malloy has said he would have no choice but to delay and potentially reduce certain municipal grants — which has the potential to place further strain on Hartford’s finances.

“I tried to avoid this,” the governor said last week, urging the General Assembly to act quickly and send him a new, two-year state budget.

“We will continue to work closely with our legislators as they work to adopt a responsible state budget,” Bronin said. “In the meantime, as we start a new fiscal year without a state budget and with significant uncertainty, we will have the advice and counsel of an experienced and highly respected restructuring firm.

Founded in Miami in 1967, Greenberg Traurig has 38 offices and employs about 2,000 attorneys in the United States, Latin America, Europe, the Middle East and Asia.