After a week without a budget, is a deal any closer? 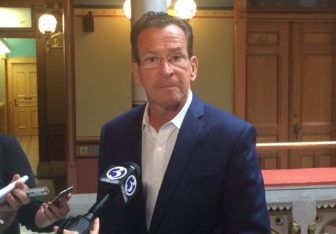 Are state lawmakers any closer to passing a state budget after a week without one?

“I think every day that goes by we get closer,” Malloy told reporters at the state Capitol Friday. But, he said, “I think it is going to be a while.”

House Speaker Joe Aresimowicz, D-Berlin, said during an interview, however, that he is aiming for July 18 for a vote in his chamber on a budget. His caucus last week released a proposed budget.

“It is still the House Democrats’ plan to come in on the 18th, not necessarily to vote on what we put out last week, but we are using that as a base for negotiations,” he said during an interview.

Senate Republican Leader Len Fasano said if no budget deal is reached before that date, then the budget of each caucus and the governor’s should be voted up or down that day.

“All budgets should be called and voted upon on the same day to allow lawmakers an opportunity to debate and cast their vote in favor of the budget that they believe will best serve the people of our state,” Fasano wrote in a legislative leaders and the governor Friday afternoon.  “It is inexcusable that the new fiscal year has begun and our state is still without a budget … I would hope that lawmakers can unite around a single proposal before July 18. But if that does not occur, we need to be ready, willing and able to vote on all the options on the table.”

Malloy, a Democrat who has negotiated six previous state budgets, said the problem is that Democrats in the House are not in agreement with Democrats in the Senate. The same is true for Republicans in each chamber.

“This is not a problem that I am creating,” he said. “That’s an unusual situation where no one seems to be in agreement. … Nobody is agreeing with anybody at the moment.”

This divide has yet to be resolved.

“I want to get a budget,” Malloy said. “I don’t want to be a governor of a state that is being run by executive order. It’s not what I ran for. It’s not something that I want to see done, nor do I believe that we should have a revenue-driven discussion. We’ve got to make some changes. People have to move,” he said.

Adam Joseph, spokesman for senate Democrats, was unable to say how close his caucus is to reaching a deal with others.

“We’re continuing to hold discussions,” he said during an interview.