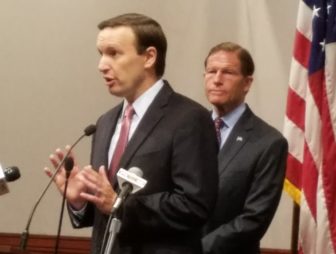 Washington — The Senate returns from its Fourth of July break this week without a firm strategy on how to move forward on a health care bill that has little public support and has split Republicans.

Senate Majority Leader Mitch McConnell is trying to fashion a bill that would win 50 votes, probably all Republican, which would allow Vice President Mike Pence to cast a tie-breaking ballot.

McConnell’s revised bill is expected to be released this week and is intended to win balky Senate Republicans on the conservative and moderate ends of the ideological spectrum, not Democrats like Connecticut Sens. Richard Blumenthal and Chris Murphy, who have waged a campaign in the state and in Washington, D.C., against the bill.

“Even if sweetened and softened, as Mitch McConnell is preparing to do, it will still have the fundamental failings of this Republican program,” Blumenthal said at a press conference in Hartford on Monday.

Conservative Sens. Ted Cruz, R-Texas, and Mike Lee, R-Utah, have threatened to vote against the bill unless it allows insurance companies to sell health plans that do not comply with the Affordable Care Act’s regulatory requirements as long as they offer at least one plan that does.

Moderate Republicans say the plan to replace and repeal the ACA cuts Medicaid, the government health plan for the poor, too deeply.

Gov. Dannel Malloy estimated the bill, which would change Medicaid from an open-ended program to one where the federal government gives each state a certain amount based on a per-capita formula, would eventually cost Connecticut nearly $3 billion a year.

“The bill that the Senate Republicans rolled out two weeks ago would cause more than 200,000 Connecticut residents to lose health care and put a $3 billion hole in the state budget at the end of ten years. Connecticut could not sustain that damage,” Murphy said at Monday’s joint press conference with Blumenthal.

J.R. Romano, the head of the Connecticut Republican Party, supports BCRA’s end to the ACA’s mandate that most Americans have insurance coverage — purchasing it in the individual marketplace if they are not covered by an employer or  government-run health plan.

Romano declined to say he would support the bill, saying “a thousand different things could change in the next 24 hours,” but said a replacement of the Affordable Care Act is a priority.

So far, consensus on the BCRA has been elusive, and support for the bill may have eroded during Congress’s break as several GOP senators fell victim to a pushback from voters.

Yet President Donald Trump put pressure on GOP leaders with an early morning tweet on Monday to pass an ACA repeal and replacement bill before Congress’s August recess.

“I cannot imagine that Congress would dare to leave Washington without a beautiful new HealthCare bill fully approved and ready to go!” the president tweeted.

Democrats this week are expected to press for changes to the ACA that would help stabilize ACA state exchanges by protecting insurers against unexpected losses if their risk pools fail to attract younger, healthier customers.

“My hope is that this repeal effort falls apart and Republicans come to their senses and join Democrats in trying to make improvements to the Affordable Care Act. Keep what works. Improve what isn’t working as well,” Murphy said.

The White House on Monday released a Gallup poll that showed there is an increase of uninsured Americans this year, after five years of a downward trend.

The poll indicated 2 million Americans dropped coverage, with the losses concentrated among younger adults who had to purchase their own insurance.

The White House pointed to the poll as an indication of the ACA’s failure. But others say the Trump administration’s decision to end a requirement that tax filers indicate they have health coverage or pay a penalty has contributed to the decisions by many to drop coverage.