Last week in Connecticut it was all about the money (or the lack of it); in Washington it was Russia and healthcare, but mostly Russia.

At the state Capitol, with no state budget in sight, Connecticut lawmakers, state employees and agencies that depend on them continued trying to find some common ground to settle the issue and still protect their own interests.

The Republican party presented its vision of a budget relying on $2 billion in labor savings created by statutory, rather than negotiated, changes. There won’t be any voting on anything for a while, though. A new union representing Connecticut’s assistant attorneys general, meanwhile, became the second collective bargaining unit to say it would not vote on Gov. Dannel Malloy’s proposal for a three-year wage freeze.

How the concession votes work. (Click image for details.)

(Here’s how that voting on wages and benefits works, by the way.) Malloy also has conceded that if the concessions he is requesting from employees are approved, his budget still will be out of balance as well.

Operating the state through Malloy’s executive order is having a number of very negative consequences for nonprofits who depend on state money to provide their services – and who have been told by the state to stop. The governor recommended even more cutbacks Thursday — to municipal aid and early childhood education.

The week’s bombshell, of course, was the disclosure that Donald Trump Jr. met with an attorney with ties to the Russian government who was promising damaging information on then-presidential candidate Hillary Clinton. His admission revealed that dozens of earlier Trump administration absolute denials of Russian contact were false.

The fallout overshadowed or influenced several issues that seemed more important beforehand, including the U.S. Senate’s ongoing effort to pass an unpopular replacement for the Affordable Care Act. That was the big item when dozens of officials and business people visited Washington, D.C., for the annual “Connecticut in the Capitol” event. Medicaid — and the proposal to cut it back and pass it to the states — continues to be a hot and polarizing issue among the nation’s governors.

The Russia issue was still reverberating loudly Thursday as Sen. Majority Leader Mitch McConnell unveiled a modified plan much like the older one, but with some significant tweaks. The president’s controversial commission to examine voter fraud also experienced a setback when the American Civil Liberties Union and other groups filed suit to block it. Connecticut, as a result, won’t be sending any of its records to Washington, D.C., for now. Clearly few state residents want to. 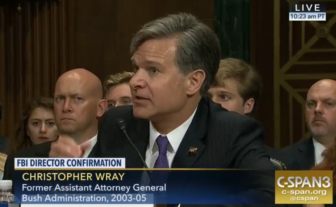 After Donald Trump Jr.’s disclosure, his father’s trial balloon on forming “an impenetrable Cyber Security unit” in partnership with the Russian government was quickly abandoned, but not before eliciting Connecticut Sen. Chris Murphy’s assessment that it would be “an absurdly bad idea.”

Murphy and money, however, are getting along just fine. The state’s junior senator – a Democrat and vocal opponent of the president’s policies and the Republican Party’s agenda – has raised $2 million in campaign contributions in the last quarter and has a re-election war chest of about $5 million now.

Various candidates for the governor’s job also have been having some fundraising success, in particular Republican Mayor Mark Lauretti of Shelton and Comptroller Kevin Lembo who each raised about $145,000 in their first months of campaigning.

Danbury’s Republican Mayor Mark Boughton is also running for governor and testing the notion that Connecticut could function without a state income tax — the one that provides almost half the state’s revenue. 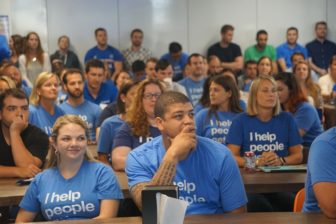 The workforce at Indeed is young, diverse and what Connecticut is trying to attract.

Among some, the state income tax has been a sore subject in Connecticut since it was enacted during former Gov. Lowell Weicker’s administration; but no sorer in Old Saybrook than the federal government’s plan to put a high-speed railroad line through the local historic district. Vociferous public opposition to the idea seems to have succeeded in killing it.

The state got bit of good news when it learned that CNBC’s ranking of Connecticut as a place to do business jumped 10 notches to 33. The news came with the announcement that Indeed, the world’s largest job-search site, is expanding its Stamford workforce of 700 to as many as 1,200.

Not so good was a report that student achievement in Connecticut has not improved; and that only one third of minority students are testing at grade level.