Washington – Federal auditors said Wednesday a Senate plan to repeal the Affordable Care Act without a replacement would increase the number of uninsured by 17 million next year and by 32 million in 2026.

The Congressional Budget Office also said average premiums for people who purchase policies in the individual marketplace — that is policies offered to those who are not covered by an employer-based or government run plan – would increase by about 25 percent in 2018 and double by 2026.

The CBO also said the repeal bill would cut $473 billion from the federal deficit by 2026. 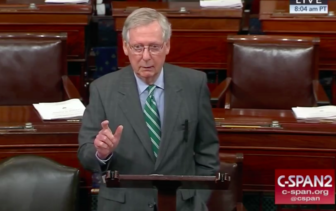 Senate Majority Leader Mitch McConnell, R-Ky., has scheduled a vote on an Obamacare repeal bill next week after legislation that would repeal and replace the ACA with a plan that pared down the federal government’s role in health care failed to garner enough support.

The repeal and replace bill that failed, called the Better Care Reconciliation Act, would leave up to 22 million more Americans without health insurance.

The repeal-only measure, which also may not have enough support in the Senate to pass, would in 2020 eliminate ACA premium subsidies and the penalties most Americans face if they go without health insurance. It also would end the expansion to Medicaid that has brought coverage to about 200,000 low-income Connecticut residents and repeal most of the taxes imposed by the ACA in 2020.

Cost-sharing subsidies that have been paid to insurers to help lower-income consumers afford their deductibles and other health expenses also would be gone in 2020 under the repeal bill.

One reason premiums would sharply increase is that the legislation – which would voted on in the Senate under a process known as reconciliation – is unable to repeal certain ACA provisions that do not have a budgetary impact, the CBO said.

So the “repeal” bill would leave some ACA mandates in place.

Insurers would still be required to provide coverage to any applicant, and they would not be able to vary premiums to reflect enrollees’ health status or to limit coverage of preexisting medical conditions.

Meanwhile the end of the “individual mandate” which was enforced by Internal Revenue Service penalties against those who are not covered by health insurance, would prompt many younger, healthier individuals to drop coverage, leaving older, sicker people in the individual market.

GOP congressional leaders chose to use the reconciliation process because it would avoid a Senate filibuster that would take 60 votes to end.

That would increase to about three-quarters of the population by 2026, the CBO said.

Connecticut’s uninsured rate dropped to 7 percent under the Affordable Care Act, one of the lowest in the nation.

President Donald Trump on Wednesday invited all GOP senators to the White House for lunch and demanded they resume their efforts to approve a plan to repeal and replace the Affordable Care Act, even if it means working through their summer recess in August.

“People should not leave town unless we have a health insurance plan, unless we give our people great health care,” Trump said. “We’re close, very close … We have to hammer this out and get it done.”

After the lunch, some GOP senators said they wanted to again try to pass a bill that would both repeal and replace the Affordable Care Act.