Many towns begin cutbacks in anticipation of lean CT budget 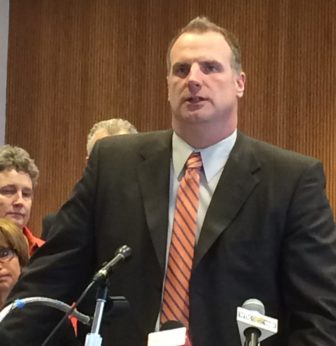 Nearly half of Connecticut cities and towns participating in a recent survey have frozen spending or cut services in response to state budget gridlock and the associated threat of reduced municipal aid, the Connecticut Conference of Municipalities reported Monday.

Of 61 communities surveyed, 29 reported some type of spending freeze since the fiscal year began on July 1.

“These survey results present a snapshot of the stresses on local government as they attempt to start their fiscal year, with little or no direction from the state regarding the level of state aid they will receive, never mind the level of state aid they need,” said CCM Executive Director Joe DeLong. “As you can see, with the looming state budget crisis this spring and summer, towns and cities moved to cut spending and limit tax hikes as they feared a significant reduction in municipal aid.”

Other survey results include:

The survey also found just over three-quarters of respondents supported removing the state cap on property tax rates on motor vehicles of 37 mills. The cap was imposed with the expectation that all communities would share $340 million this fiscal year in state sales tax receipts under a revenue-sharing program enacted by legislators and Gov. Dannel P. Malloy just two years ago.

But all state budget proposals issued to date either reduce that funding or eliminate it entirely.

“And the specter of towns and cities needing to reopen their local budgets to adjust for significant cuts in state aid that could result from a final state budget agreement has created an unprecedented local-budget situation among municipal leaders ─ who pride themselves on responsible fiscal management and balanced local budgets year in and year out,” noted DeLong.