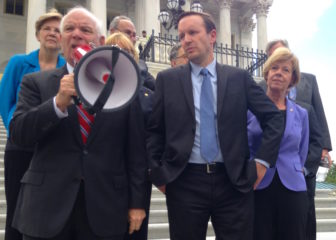 Sen. Chris Murphy joins other Democratic senators on the Capitol steps to address protesters after the Senate vote on the health care bill.

Washington – Senate Republicans and the White House had a win Tuesday on a procedural vote to repeal Affordable Care Act, but a final victory is not guaranteed.

It was just a first step in a series of dozens of votes that will determine whether Senate Republicans can pass a health care bill.

Tuesday’s vote on a procedural motion that allows the Senate to begin work on a health care bill was 51-50, with no Democrats voting in favor and two Republicans, Sens. Sue Collins of Maine and Lisa Murkowski of Alaska, voting “no.” Vice President Mike Pence cast the tie-breaking vote.

The mood in the Senate chamber during the vote was somber. Uncharacteristically, most senators sat quietly at their desks. But they rose in unison to applaud the entrance of an ailing Sen. John McCain, R-Ariz.

During the 30-minute roll call, protesters in the Senate gallery occasionally shouted “shame” and “kill the bill” – and were promptly removed by Capitol Police.

McCain, who was recently diagnosed with brain cancer, said he voted for the procedural motion to allow the process to continue, but would not vote for the Senate GOP bill, called the “Better Care Reconciliation Act (BCRA), “as it is today.”

McCain criticized the way the BCRA was written behind closed doors by a dozen Senate Republicans in consultation with the White House and urged the Senate to return to “regular order,” or crafting legislation through amendments and votes in committees – with the participation of Democrats.

“If this process ends in failure, which is likely, let’s return to the regular order,” McCain said in a speech after the vote.

Democrats, including Connecticut Sens. Richard Blumenthal and Chris Murphy, plan to introduce dozens of amendments to slow down the process, and possibly alter the BCRA.

“We will continue to fight,” Blumenthal said. “The next phase is just beginning.”

Republicans, meanwhile, hope to win approval for a bill they can marry to an ACA replace-and-repeal bill the U.S. House approved in May. A final bill would be negotiated between the House and Senate and would need to pass both chambers.

One problem facing the GOP is that key provisions of the bill don’t meet the standard for “reconciliation,” or approval by a simple, filibuster-proof majority vote. Among those provisions, which didn’t meet parliamentary rules, are the bill’s plans to defund Planned Parenthood, restrict tax-credit funding for insurance plans that provide abortions, and a six-month “lockout” period for purchasing insurance for people who don’t maintain continuous coverage.

Sen. Bob Corker, R-Tenn., said these provisions would be stripped out of the BRCA and offered as amendments, requiring 60 votes to pass, which is unlikely. Corker said the final result of the amendment process would be a bill that would garner at least 50 votes.

“At the end of the day, we’ll have the lowest common denominator,” he said.

Debate began shortly after the vote on an amendment sponsored by Senate Majority Leader Mitch McConnell that would repeal the Affordable Care Act without a replacement.

He also introduced the entire BCRA as an amendment, but added a provision sponsored by Sen. Ted Cruz, R-Texas, that would allow the sale of stripped-down insurance plans. The amendment also would create a new $100 billion fund to help states that had expanded the Medicaid program and would face the loss of federal funds for that expansion program.

The modified BCRA legislation failed to win enough support late Tuesday and the amendment that would repeal the Affordable Care Act without a replacement is also expected to fail.

McConnell’s plan then is to to open the Senate floor to a “vote-a-rama,” or votes on dozens of other amendments.

Democrats condemned the GOP plans, especially since the goal may be to pass a stripped-down bill that can be negotiated with the U.S. House.

“If (the Senate) is planning to pass a stripped-down bill, it is surrendering to the House,” Murphy said.

He said he planned to introduce 100 amendments and knew of other Democrats that will do the same. Blumenthal also said he hopes to put forward “a ton of amendments to preserve the Affordable Care Act.

“The vote was a sham because it is a motion to proceed, and we are proceeding to a shell, not a bill,” Blumenthal said. “It is really a mockery of democracy.”

Gov. Dannel P. Malloy said, “The vote by Senate Republicans to begin debate on a mystery healthcare bill is abhorrent and dangerous.

“What we do know is that every proposal presented by the Republicans to date would result in further destabilizing the individual market, millions losing coverage, and premiums increasing – particularly for our most vulnerable residents,” Malloy said in a statement.

At a news conference in the Rose Garden after the Senate vote, President Donald Trump said he was  “very, very sad” for the Republicans who opposed the motion but “very happy with the result” of the vote.

“Now we’re all going to sit together and try to come up with something really spectacular,” the president said,.

But he also said Republicans face “a narrow path” on health care.