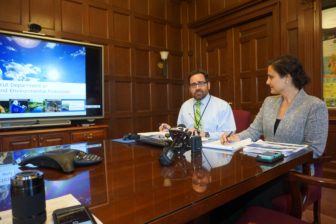 Connecticut published a draft of its overdue comprehensive energy strategy Wednesday at a tumultuous time as the Trump administration steps away from international climate accords and the state faces the threatened loss of its biggest source of carbon-free power, the Millstone Power Station.

The Department of Energy and Environmental Protection’s updated strategy calls for Connecticut to reduce carbon emissions by 30 percent by 2030 with a focus on growing large-scale, renewable energy procurements that tend to produce electricity much more cheaply than small-scale renewables such as rooftop, residential solar.

“Our draft 2017 CES recognizes that reducing carbon emissions – from power generation, heating and cooling buildings, and from the vehicles we all drive – is the key to both the health of our planet and sustainable economic success in Connecticut,” said Robert J. Klee, the commissioner. “To address these challenges, our updated strategy proposes continued development of a modern and versatile electric grid powered by renewable energy sources – and using this clean power to meet the needs of our building and transportation sectors.”

Mary Sotos, the deputy commissioner for energy and technology policy, tried to reassure the residential solar industry that the new emphasis on “grid-scale” renewable power should not be interpreted as an abandonment.

“As we move to a greater reliance on renewble energy sources, there will always be room for a healthy growth in the number of residential solar installations,” Sotos said.

Michael Trahan of Solar Connecticut, a trade group, said one downside of Connecticut’s recent history of purchasing solar power is that the much of the electricity has come from out-of-state projects, doing nothing for the state’s industry and jobs.

One relatively small recommendation is likely to be controversial: DEEP wants to be able to impose a fee on heating oil, with the proceedings going into an existing energy efficiency fund now generated by customers of electric and natural gas utilities.

The original comprehensive energy strategy, which was delivered in 2013 and was to be updated in 2016, pushed the state to take advantage of low natural gas prices to meet a goal of cleaner, cheaper and more reliable power in a state with the most expensive electricity in the continental U.S.

Debate on the new policy, which will be the subject of public hearings and ultimately require legislative action next year, begins as Dominion Energy is threatening to close the Millstone Power Station, frustrated by the legislature’s refusal to change energy procurement rules.

The Virginia-based energy company says Millstone is among the nation’s nuclear plants whose profitability is threatened by electricity prices that are set at auction by plants that are fueled by cheap natural gas.

Gov. Dannel P. Malloy issued an executive order Tuesday directing the Department of Energy and Environmental Protection and the Public Utility Regulatory Authority to assess the regional energy market, procurement rules and the economics of Millstone, whose two nuclear reactors in Waterford can meet nearly half the state’s electric needs.

The order essentially is an element of the new comprehensive energy strategy. Dominion hinted Tuesday it needs relief sooner than Feb. 1, the deadline Malloy set for the nuclear assessment.

Klee urged Dominion to be patient — and to cooperate in the assessment. He said he saw no way for an assessment to be completed this summer to allow passage of legislation in special session, a demand of Dominion’s.

“To do it right, you need to actually enlist the help of sophisticated consultants with models. You need to get as much information as we can from Millstone directly that will actually affect our ability to come up with a reasoned, thoughtful answer, but that doesn’t happen in two weeks. It definitely doesn’t happen on the last night of the session, but it doesnt happen in two weeks, either.”

Klee was referring to a compromise bill that the Senate passed at the end of the 2017 session in June. It called for a study similar to the assessment ordered by Malloy, but it also would have authorized state regulators to make changes in how the state procures electricity.

The legislature would have had an opportunity to review and stop any changes in the bill that passed the Senate, only to die from inaction in the House.

Hennessy said he appreciated that the governor’s order, but he could only deliver half of what was in the Senate bill: There is a study, but no guarantee of authority to act on the findings.

The latter goal of getting more zero-emission vehicles on the road is undercut by cheap gasoline prices. Transportation produces 36 percent of greenhouse gases in Connecticut, the single biggest source. The generation of electric power is second, with 22 percent.

The primary ways to reduce greenhouse gas emissions from transportation sources is to encourage electric cars, increase fuel efficiency and reduce the number of vehicle miles traveled. Average daily miles traveled Connecticut has steadily increased from more than 40 million miles in 1970 to about 90 million miles.

DEEP officials were briefing environmental groups and other stakeholders throughout the day Wednesday on their detailed draft. 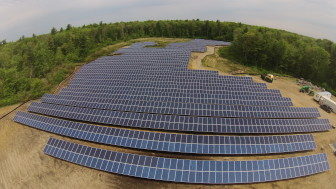 Initial reviews were less than favorable.

John Humphries of the Connecticut Roundtable on Climate and Jobs said the plan needs to be bolder. He said his group is “disappointed that the document does not clearly evaluate the overall impact on projected greenhouse gas emissions and whether the proposed strategies will be sufficient to achieve the state’s climate goals.”

“We need to know whether this CES puts us squarely on the path to achieving even the 2020 goal of a 10 percent reduction in emissions, not to mention the broader vision of a clean energy future,” he said.

Claire Coleman of the Connecticut Fund for the Environment said her group appreciated the efforts by the “resource-strapped” department.

“We’re pleased to see the emphasis on transition to a cleaner energy economy, including reduced reliance on natural gas and burning biomass, and continued strong investment in energy efficiency,” she said. “However, there are some significant missed opportunities, and the draft plan doesn’t get Connecticut where we need to be in terms of greenhouse gas reductions.”

The Connecticut Sierra Club also found the plan lacking, saying it still was too reliant on fossil fuels, even as its prose focuses on renewables.

“It is both shocking and troubling that while President Trump is doubling down on fossil fuels and new pipelines in D.C., Connecticut has chosen to follow his lead,” said Martha Klein, the chair of the Sierra Club. “Sadly, this CES draft simply does not hit the clear renewable energy goals set forth by the Global Warming Solutions Act.”

Ann Pratt of the Connecticut Citizen Action Group said, “With the new CES we have a unique opportunity to better embrace renewable energy and turn away from our reliance on fossil fuels. I encourage all Connecticut residents to speak up at public hearings and tell regulators that our state deserves cleaner energy now.”

The first of a half-dozen public hearings is 6:30 p.m. on August 14 at Webb Hall at Eastern Connecticut State University in Willimantic.

Hearings also will be held at 6:30 p.m. at Housatonic Community College Bridgeport on Aug. 16, Fort Trumbull State Park in New London on Aug. 21, City Hall in Torrington on Aug. 29, DEEP headquarters in Hartford on Sept. 6, and the Connecticut Agricultural Experiment Station in New Haven on Sept. 7.