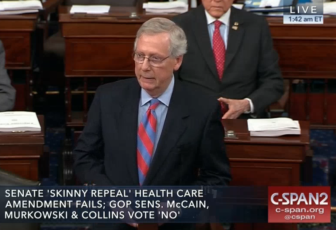 Majority Leader Mitch McConnell after the vote. He told the Senate it’s time to move on.

Washington – Senate Republicans failed early Friday to win approval of a “skinny” bill they hoped would  grow into a full-fledged repeal and replacement of the Affordable Care Act, putting an end to efforts to eliminate Obamacare, at least for now.

The effort to repeal the Affordable Care Act faltered after Republican Sens. John McCain of Arizona, Susan Collins of Maine and Lisa Murkowski of Alaska joined all Senate Democrats and its two independents to vote against the skinny bill. With 52 members, Senate Republicans could only afford to lose two votes, with Vice President Mike Pence ready to cast a tie-breaking vote.

‘This is clearly a disappointment,” McConnell said. “I regret that our efforts were not enough this time.”

After the vote, President Donald Trump tweeted, “3 Republicans and 48 Democrats let the American people down. As I said from the beginning, let ObamaCare implode, then deal. Watch!”

Sen. Richard Blumenthal, D-Conn., had a different take. “Let this be the end of a misguided and misanthropic effort to repeal the Affordable Care Act,” he tweeted.

Democrats fought hard against GOP efforts to repeal the ACA.

But several, including Sen. Chris Murphy, D-Conn., said he hoped McCain would join Collins and Murkowski, who have opposed other GOP efforts to repeal the ACA, but could not guarantee they would prevail on the  vote on the skinny bill.

Murphy had called the bill “the most irresponsible thing I have seen in public service.”

After the vote the senator, who had stopped shaving in protest of the effort to repeal the ACA, tweeted, “I ran into John McCain as we walked underground to the Senate for the final vote. Someday I’ll get to tell my grandkids what he said to me.”

Both Blumenthal and Murphy said they are ready to work with Republicans on improvements to the ACA.

Gov. Dannel P. Malloy said the vote on the repeal bill “was a sickening attempt to score cheap political points at the expense of American men, women and children.”

“Senate Republicans have failed to produce a single proposal that would improve the American healthcare system.  Instead, time and time again they have put forth destabilizing proposals that would result in millions more uninsured, higher premiums with less comprehensive coverage, and eviscerating coverage for our most vulnerable residents,” he said.

Malloy said congressional Republicans “must immediately stop this attack on healthcare” and instead work with the nation’s governors to stabilize insurance markets.

The “skinny repeal” would have left  much of Obamacare in place. But it would have repealed the ACA’s mandates for individuals to purchase insurance and businesses with 50 or more full-time employees to cover their workers.

The eight-page bill would extend a moratorium on a medical device tax and boost a provision in the ACA known as Section 1332 that allows states to get waivers from the health care law’s mandates, including its essential health benefits.

The slimmed-down repeal bill also would impose a ban on using Medicaid money to pay for all services at Planned Parenthood clinics.

The GOP plan was to take the “skinny” bill to a conference with the House on a more substantial bill the House approved in May that would repeal and replace the ACA.

With that path no longer available, and the failure to pass other proposals that would replace the Affordable Care Act, McConnell said, “Now it is appropriate to ask (Democrats) what their ideas are” to address escalating premiums and the flight of insurers from state ACA exchanges.

Democrats have been pressing the GOP to repair, not repeal the ACA, in part by implementing policies that would lessen insurers’ risks.

“Bailing out insurance companies with no thought of any kind of reform is nothing I want to be a part of,” he said.

The skinny bill was panned by health care stakeholders, including doctors and hospitals.

“Policies that do not stabilize the market and simply provide incentives for people to buy coverage will repeat what we have seen in the past, premiums will rise rapidly, few or no affordable coverage options will be available and more people will be uninsured,” America’s Health Insurance Plan President Marilyn Tavenner wrote Senate leaders.

As the Senate  moved to a vote on the skinny bill Thursday, Reps. Joe Courtney and John Larson pitched their own plan.

The Connecticut Democrats said they plan to introduce a bill in September to allow Americans aged 50 to 64 to buy into the Medicare program, the federal health care plan that is now open only to those who are 65 and older.

Older Americans pay the highest premiums for coverage in the individual market and are more likely than any other age group in that market to have a pre-existing condition.

“We hope this is a front door to coverage for those who need it,” Larson said.

The idea isn’t new. Hillary Clinton proposed it when she was running for president last year.

Larson and Courtney said their plan to expand Medicare coverage to younger Americans would include the cost-sharing subsidies insurers have sought and reintroduce reinsurance programs that lessen insurers’ risks.

Courtney said small businesses could take advantage of the expanded Medicare program to cover their employees.

“This will be a real godsend to small businesses,” he said.

The bill’s sponsors, which include Rep. Brian Higgins, D-N.Y., vowed the bill would not cost the American taxpayers any money and would be funded fully by premiums paid by those who enroll in the plan.

“So it’s hard to understand why we don’t do it,” Higgins said.

The idea of expanding Medicare has been rejected by Republican leaders because they hope to roll back, not expand the federal government’s role in health care. Some view it as a first step toward a “single payer” or government-run health care system.