Without a budget, Malloy says he will shift state aid to poorer school districts 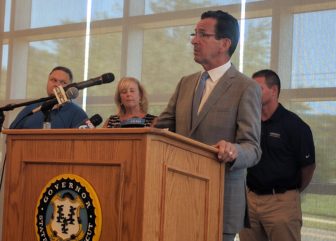 With the first day of school quickly approaching, Gov. Dannel P. Malloy said Tuesday he will use his executive authority to shift state school aid from more affluent towns to better shield poor districts from cuts.

The governor, citing the need to let school districts make staffing decisions now, said he is preparing to revise the executive order he signed to operate the state after lawmakers failed to pass a budget before the fiscal year began July 1.

“We will reevaluate how we’ll distribute aid to communities,” Malloy told reporters at a press conference at a high school in Meriden. “That may mean that some districts will have to receive less money so that other districts can receive an appropriate amount of money.”

In his executive order, Malloy outlined plans to reduce state education spending by $506 million if the legislature still has not adopted a budget by the time the first Education Cost Sharing (ECS) payments are sent out in October. The ECS grants are the main vehicle for state aid to local schools.

That plan would have cut education aid to 163 towns, including several of the state’s lowest-performing districts, and increased aid to six towns. In Meriden, where the Democratic governor held his press conference to release SAT results and highlight the impact of the budget stalemate on the start of the school year, his executive order would have cut state aid by $8.3 million – a 14 percent reduction. New Haven would lose $23 million, a 15 percent cut, and Hartford $18 million, a 9 percent cut.

Saying the cuts are too deep for the 30 lowest-performing districts, referred to as Alliance Districts, Malloy said he is preparing to revise his executive order to shield those towns by imposing larger cuts to better-off communities. The order already had eliminated all education aid for 34 municipalities.

“If this is going to drag on, then quite frankly some of those assumption will have to be adjusted to reflect the constitutional requirement in respect to education,” he said. “The executive order, like other documents, is a living document that needs to reflect the situation as it evolves … There will be a recognition that these are the districts that we clearly need to fund and, in my opinion, need to send additional dollars to, and not fewer dollars to.”

Malloy’s decision to use his executive order to implement his own education funding formula comes as a landmark school-funding lawsuit heads for the Connecticut Supreme Court. Last fall, a Superior Court judge ruled that the way the state is funding its public schools is irrational, and therefore unconstitutional. The Supreme Court is set to hear arguments on that case on Sept. 29.

Facing massive budget shortfalls, the Democratic-controlled legislature and Malloy have been unable to reach consensus on how to move forward on distributing aid to the state’s public schools.

Malloy had proposed shifting $400 million in annual teacher pensions costs to municipalities, and then allowing them to tax hospital real estate to make up for much of that reduction. He also proposed a major redistribution of state education aid to favor struggling districts.

But House Speaker Joe Aresimowicz, D-Berlin, said Tuesday a redistribution of education aid will not get enough votes in his suburban-dominated chamber.

Meanwhile, educators are warning that the stalemate is putting them in a difficult position as the start of the school year approaches.

Patrice McCarthy, with the Connecticut Association of Boards of Education, said many districts already have elected to lay off staff and are postponing decisions on bringing them back until the fiscal picture becomes clearer.

“They are now at that critical point for decisions so that they will be able to open school, but not with the staffing and support that they had been hoping to have,” she said during an interview.

“We are seeing a negative impact across the board,” she said. “The uncertainty is just making it so difficult for districts to plan.”

Mark D. Benigni, the Meriden superintendent, said his school board adopted a budget assuming state funding would be flat. He said he is waiting to see what happens and in the meantime is preparing to increase class sizes and has not been filling tutoring positions.

“Our students are in jeopardy here,” he said. “The state needs to figure this out.”