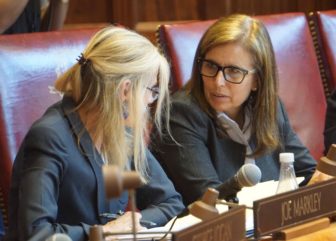 Though moderate Democratic legislators unenthusiastically helped ratify union concessions, the fiscal reforms they want in return may hinge on whether moderates will tolerate one more thing.

Many other Democrats want that tax hike to shield municipal aid. And with Republicans unlikely to support a new budget built on the concessions package — which saves $1.57 billion over the coming biennium but also guarantees employee benefits through 2027 — Democrats’ chances of passing anything in a sharply divided legislature require near-unanimity within the party.

“It’s going to be a balancing act,” House Speaker Joe Aresimowicz, D-Berlin, told The Mirror on Tuesday. “I’ve been saying this budget is going to be a 70-30 document. Seventy percent of it I think a majority of the members of both (Democratic) caucuses can really stand behind and say it’s good for the state, and 30 percent are going to be things we don’t like. And that is the art of compromising.”

But Sen. Joan Hartley of Waterbury, one of three moderate Democrats whose reluctant acceptance of the concessions deal enabled its ratification, warned the chamber last week not to assume that means she would accept just any plan for the next state budget.

“We also have been trying to be clear with everybody in the building, and I quite frankly don’t think it’s going to be a surprise,” what moderates are seeking, she said.

Some of the reforms sought by Hartley and Demcratic Sens. Paul Doyle of Wethersfield and Gayle Slossberg of Milford would restrict in statute benefits the state could offer in future contracts when the latest concessions deal expires in mid-2027.

They would end automatic cost-of-living adjustments to pensions, remove overtime earnings from pension calculations, and restrict future benefits contracts with state employee unions to no more than four years in duration. 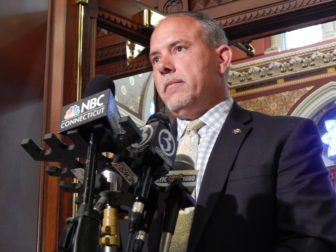 Other reforms would peg arbitration awards to the state’s ability to pay increased wages and benefits and create a commission to develop a sustainability plan for the pension fund for municipal teachers.

Connecticut has one of the worst-funded packages of retirement-benefit programs in the nation, and costs in these areas are projected to surge dramatically over the next decade-and-a-half. One study projects the state’s annual contribution will grow from $1 billion last fiscal year to more than $6.2 billion by 2032.

The moderates also want Connecticut to retain independent fiscal expertise to help develop a strategy to survive the growing fiscal crisis, which is projected to get significantly worse before it gets better.

“We’re not looking for more studies or legislative task forces,” Doyle said, noting too many of those have been ordered — with little effect — in the past. “We talking about bringing in outside experts to analyze our significant financial liabilities and educate us and provide direct, legislative recommendations on how we can get out of this fiscal nightmare we face.”

And Slossberg said there is more support for these reforms than three senators.

Slossberg was part of a group of House and Senate Democrats who met in late June with executives from Millstein and Co., a Manhattan-based financial services firm specializing in financial restructuring and long-term strategy.

Millstein and Co. has advised Puerto Rico on debt restructuring and other fiscal matters. It also assisted the U.S. Treasury in 2008 with the restructuring of the Federal National Mortgage Association, commonly known as Fannie Mae, and the Federal Home Loan Mortgage Corporation, or Freddie Mac. 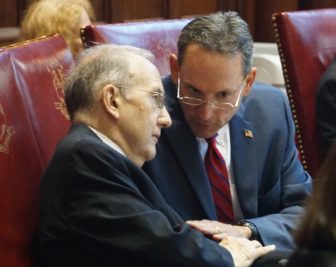 “We all believe very seriously that the items we’re talking about really need to happen,” Slossberg said. “Until the work is done, we will continue to be fighting for it.”

Aresimowicz says there is strong support in his caucus for a modest sales tax hike.

House Democrats proposed raising the sales tax rate from 6.35 to 6.99 percent, placing surcharges on restaurant and hotel transactions, and dedicating some of those receipts to bolster municipal aid.

Senate Democrats have not taken a position on the sales tax. But Senate President Pro Tem Martin M Looney, D-New Haven, told The Mirror this week that his caucus has researched a sales tax rate hike as well as closing some sales tax exemptions.

But developing an option isn’t the same as proposing an increase, and the Senate leader added that “everything has to be a negotiation.”

And those negotiations also include Gov. Dannel P. Malloy.

There’s consensus among all legislative leadership and the governor to steer clear of raising income tax rates, if at all possible, to close the projected $5.1 billion hole in state finances for the coming biennium.

But Malloy wants to avoid raising the sales tax rate as well.

The governor has pressed lawmakers to cut more deeply into local aid, and also to redistribute these resources to shield Connecticut’s poorest communities. But that also would mean most cities and towns would face a cut.

Malloy shielded local aid from budget cutbacks during his first year in office, when he and lawmakers closed a whopping 18 percent hole in the General Fund as Connecticut climbed out of the last recession.

But the state’s economic growth has been slow since then, and the governor says lawmakers must accept this reality and make more sweeping changes.

That position, combined with a narrow 79-72 Democratic edge in the House and an 18-18 deadlock in the Senate, make the math of passing any budget very tricky.

Democrats hold the tie-breaking 37th vote in the Senate in the form of Lt. Gov. Nancy Wyman, who is Senate president.

But they fall far short of the 101 votes in the House and 24 in the Senate they would need to override any potential veto from the governor.

So if Democrats want to pass a budget by themselves, they need to work with the governor.

And the administration, which hasn’t ruled out a sales tax hike, also indicated this week it could work with moderate Democrats on their priorities.

“Governor Malloy remains committed to resolving the state budget impasse and moving the state forward with an adopted biennial budget rather than continuing to run the state via executive order,” Chris McClure, spokesman for the governor’s budget office, said this week. “Ideas for long-term, structural changes should absolutely be a part of that discussion, and we are ready to work with the Senate Democratic caucus to explore these ideas.”