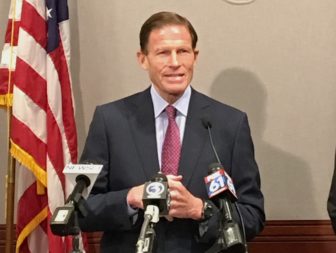 Washington – Sen. Richard Blumenthal, who is leading a group of Democratic lawmakers in a lawsuit accusing President Donald Trump of violating the Constitution’s Emoluments Clause, has been chided by Sen. Charles Grassley for not taking possible violations of that clause by former Secretary of State Hillary Clinton into consideration.

“I read with interest the lawsuit you filed against President Trump regarding his alleged violations of the Emoluments Clause,” wrote Grassley, R-Iowa, to Blumenthal. “Since March 2016, I have been asking about Secretary Clinton’s receipt of money from foreign governments and foreign instrumentalities, without the consent of Congress, during her tenure as Secretary of State. Secretary Clinton’s actions raise nearly identical concerns about compliance with the Clause as those you identified related to President Trump, but you did not acknowledge them in your complaint.”

Blumenthal and Conyers have spearheaded a lawsuit that claims Trump has violated the Foreign Emoluments Clause of the U.S. Constitution, which was designed to ensure that the nation’s leaders would not be corrupted by foreign influence or put their own financial interests over the national interest.

It requires the nation’s presidents to clear any gift or payment from a foreign leader with Congress.

Grassley, the chairman of the Senate Judiciary Committee, wrote Blumenthal, a member of the panel, and Conyers, the top Democrat on the House Judiciary Committee, that “any violations of the Clause should be pursued and remedied in an evenhanded and objective manner, regardless of who may have committed them.”

Grassley’s letter cited legal opinions that said application of the clause should extend to family members and said Clinton had “received emoluments that were not validated by Congress” because she benefited from large speaking fees and other payments her husband, former President Bill Clinton, received after leaving the White House. 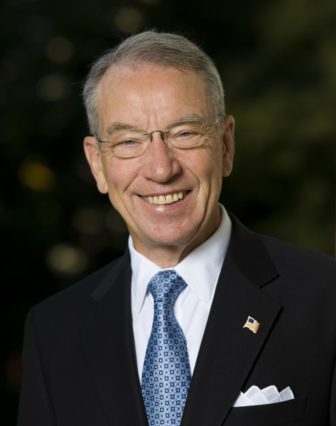 “We share Chairman Grassley’s interest in the Foreign Emoluments Clause and welcome his review of our efforts to enforce one of the Constitution’s most critical anti-corruption measures,” Blumenthal and Conyers responded in a joint statement.

There are several lawsuits regarding Trump and the emoluments clause.

On Wednesday, a federal court scheduled oral arguments in October for a lawsuit filed by Citizens for Responsibility and Ethics in Washington, or CREW, that has been joined by the Restaurant Opportunities Centers United, an association of restaurant workers.

The lawsuit claims that Trump’s position as president gives his businesses, including the new Trump hotel in Washington, D.C., an unfair advantage over competitors.

Grassley wrote CREW a letter similar to the one he sent to Blumenthal and Conyers. The attorneys general of Maryland and the District of Columbia, who have also sued Trump over the emoluments clause, received a similar letter from the Iowa senator.

Grassley’s letters did not stop Blumenthal and Conyers from filing an “amicus” or “friend of the court” brief Friday in support of the CREW lawsuit.

The Washington Post on Thursday reported that the Trump hotel in Washington had earned nearly $2 million in profits during its first four months in operation, and that the Trump Organization had projected that it would lose $2.1 million during that period “as it established a new hotel and convention business in the nation’s capital.”

The article also said the hotel is probably the most expensive in the city, and its profits were driven by “the extraordinary prices guests have been willing to pay for rooms.”

Blumenthal said the full scope of Trump’s possible violations of the emoluments clause is unknown because the president declines to reveal his foreign business deals. But the senator said they could include entities owned by foreign states paying rent at Trump Tower in New York City and the Chinese government’s granting of 40 trademarks to the Trump Organization.

Trump and the White House have both dismissed the emolument clause lawsuits, saying the president has not violated the clause because he handed over management of his family’s companies to his children and handed over ownership of his personal trust.