With municipal aid on chopping block, a cordial chat 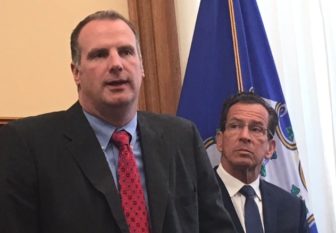 Malloy’s approach to closing a remaining $1.6 billion state budget shortfall for this year would hit municipalities on at least two fronts: requiring them to contribute to a teacher pension system now wholly financed by the state and teacher conttributions, and writing a new formula to distribute what the governor says must be a reduced budget for education aid.

Given that municipal aid and teacher pensions have been major points of contention in budget talks, the governor’s joint press conference with the executive directors of the Connecticut Conference of Municipalities (CCM) and Council of Small Towns (COST) was surprisingly cordial, even if some of their comments had the cautious tone of a diplomatic communique.

“I believe that we had a productive meeting,” Malloy said after his closed-door meeting with Joe DeLong of CCM and Betsy Gara of COST. “That doesn’t mean there were any final products to be produced today, but I share a great many of their concerns and, quite frankly, their goals. I expressed that.”

Unclear was how supportive Malloy was willing to be in pushing the General Assembly to grant cities and towns relief from mandates and labor laws, a topic certain to mobilize opposition from public-employee unions. At the same time, DeLong and Gara were careful not to say how much ground they are willing to cede on municipal aid.

Malloy said he did not expect them to engage in public negotiations, but he was heartened that the cities and towns seemed to have moved past what has been non-negotiable: maintaining the principle of “hold-harmless” aid levels, the idea that whatever changes are made to aid formulas, no community would end up with less money.

“In a perfect world, everyone would be held harmless and would actually get more,” Malloy said. “I think there is an admission this may not be a perfect world.”

DeLong interjected to say, “This session we have never once uttered the words ‘hold harmless,’ not one time.”

The remark raised eyebrows among aides to legislative leaders who have felt pressured by local officials to resist Malloy’s proposed cuts.

One top legislative leader, Senate President Pro Tem Martin M. Looney, D-New Haven, quickly issued a statement suggesting that DeLong’s comment did not comport with what he and others are hearing from mayors and first selectmen. 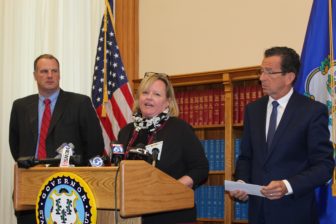 “For the chief lobbyists of CCM and COST to stand up publicly and declare that they have not and are not asking for towns to be held harmless when it comes to municipal aid is misleading and does not accurately represent the positions of the mayors and first selectmen from whom we have heard,” Looney said.

“It has been extraordinarily difficult to put together a final budget largely because of this issue of municipal aid,” he said. “If the top lobbyists for the two largest municipal advocacy organizations and their mayors and first selectmen are willing to stand side-by-side with the governor as he renews his call to pass his budget and the hundreds of millions of dollars in cuts to municipal aid, then it should not be difficult reaching a final budget agreement that slashes aid to cities and towns.”

After their meeting with Malloy, neither DeLong nor Gara embraced an agreement that “slashes” aid. Later they said Looney had mischaracterized their position.

“The press conference today was intended to highlight discussions about the need for mandates relief and greater flexibility on the local level to control costs. Our participation should in no way be misinterpreted as support for the governor’s budget or cuts in municipal aid,” they said in a joint statement.

Malloy said Friday the degree of his cuts, as well as the level of local contributions for teacher pensions, are negotiable.

Malloy said reduced aid is better than no aid. His administration intends to notify local officials by the end of the month how much aid they would lose if there is no budget, and for many the answer may be they would receive nothing for schools.

The governor’s rationale is he has no authority to make education aid payments, except to the level necessary for the state to meet its constitutional obligation of ensuring the availability of a free public education.

Looney offered no comment on whether Democratic allies of labor have an appetite for changes in collective bargaining. Gara and DeLong say the issue must be addressed.

“If we can’t do mandate relief now, it’s never going to happen,” Gara said. “And we have to get serious about moving these issues forward, things like prevailing wage reform, binding arbitration reform, things that can help towns minimize the need for steep property tax increases and the disruption of local services.”

The state prevailing wage law, which was adopted in 1933, requires municipalities to pay a certain level of wages and benefits on new construction projects costing $400,000 or renovations costing at least $100,000. Local officials complain it drives up costs, while unions say it ensures a decent wage base.

DeLong said legislators often complain that municipalities are slow to cut costs by regionalizing services, such as 9-1-1 dispatching centers.

“We can’t do it, because all these people are under labor contracts and unless we do something to address that, then what we are going to be doing by law is paying for people to sit in an empty 9-1-1 center that’s not working any more and maybe crocheting while they are collecting a paycheck,” DeLong said in an interview after the news conference.

DeLong said the changes CCM and COST seek are not an attack on labor.

“I’m not here to try to do anything to eliminate the power of labor unions or take away their ability to collective bargain or any of those types of things,” he said. “Some people would probably like to see that happen. But I don’t think our membership generally has those positions.”

A spokesman for Council 4 of AFSCME, which represents more than 16,000 municipal employees in Connecticut, said the municipal associations are on the wrong track.

“Instead of balancing the budget on the backs of hard-working, middle-class workers, CCM and COST should be looking at revenue solutions to help cities and towns meet the demands for services,” said Larry Dorman, the union spokesman. “It’s time to stop blaming police officers and librarians and para-professionals and teachers and so many others, plow drivers, who are in no way responsible for the challenges that are facing the cities and towns.”