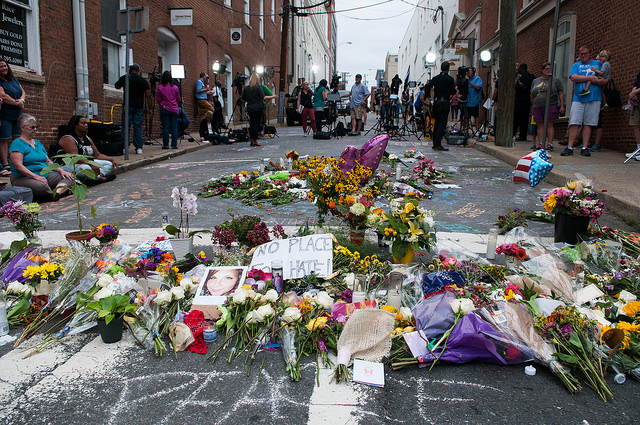 Downtown Charlottesville memorial to Heather Heyer, slain when a white supremecist drove his car into a crowd of protesters. (Photo by Bob Mical | Creative Commons)

Washington – President Donald Trump’s revival of a declaration that “both sides” were to blame for  the deadly violence at a white supremacist rally in Charlottesville, Va., has drawn swift rebukes from Connecticut members of Congress — and a growing number of their GOP colleagues.

Sen. Chris Murphy was among the first in Congress to condemn the president’s defiant statements, made in a combative press conference Tuesday afternoon. The Democratic senator was also among the first to criticize Trump when the president first blamed the counter-protesters for the violence over the weekend.

“Just stopped on roadside to read @POTUS remarks. I nearly threw up. An American President offering a defense of white supremacists. My god,” Murphy tweeted.

The senator is walking across Connecticut, as he did last summer, in an attempt to connect with constituents.

“A reminder that this isn’t a Democrat vs. Republican problem. It’s a President who purposely coddles Nazis and racists vs. sanity problem,” Murphy tweeted.

Sen. Richard Blumenthal, D-Conn., was also swift in the condemnation of the president’s remarks.

He also said, “Donald Trump is not the real America.”

In a press conference in Hartford Wednesday, Blumenthal said, “The blame is not on both sides.”

“No ‘fine people’ carry swastikas or burn torches or shout epithets and spew hatred in the way that the white supremacists and neo-Nazis and KKK members did in Charlottesville,” he said.

But it’s not the condemnation of congressional Democrats that is worrying the White House. Late Tuesday it sent out “talking points” to Republican lawmakers to help them cope with the fallout from Trump’s remarks, which included making an equivalency between the  “alt-right,” a loose coalition of conservative and fringe groups that back a nationalist and often racist agenda, and “the alt-left,” groups that are fighting racism, including “antifa,” an anti-fascist movement.

The president also compared founding fathers George Washington and Thomas Jefferson to confederate generals Robert E. Lee and Stonewall Jackson, suggesting the founders statutes could also suffer the same fate as confederate statues that are being taken down by local officials – and protesters.

The talking-point memo said Trump was “entirely correct” in his controversial statements abot the violence in Charlottesville.

“Despite the criticism, the President reaffirmed some of our most important Founding principles: We are equal in the eyes of our Creator, equal under the law, and equal under our Constitution,”  says one bullet point.

Other bullet points tell lawmakers to say the following about Trump:

— He has been a voice for unity and calm, encouraging the country to “rediscover the bonds of love and loyalty that brings us together as Americans.”

— He called for the end of violence on all sides so that no more innocent lives would be lost.

— The President condemned the hate groups fueled by bigotry and racism over the weekend, and did so by name yesterday, but for the media that will never be enough.

— The media reacted with hysteria to the notion that counter-protesters showed up with clubs spoiling for a fight, a fact that reporters on the ground have repeatedly stated.

The talking points also proffered, “From cop killing and violence at political rallies, to shooting at Congressmen at a practice baseball game, extremists on the left have engaged in terrible acts of violence,” and “The President is taking swift action to hold violent hate groups accountable.”

But there is evidence some congressional Republicans are not buying into the memo.

Sen. John McCain, R-Ariz., tweeted, “There’s no moral equivalency between racists & Americans standing up to defy hate & bigotry. The President of the United States should say so.”

Rubio also tweeted, “The #WhiteSupremacy groups will see being assigned only 50% of blame as a win. We cannot allow this old evil to be resurrected.”

Sen. Lindsey Graham, R-S.C., said Trump “took a step backward” by “suggesting there is moral equivalency between the white supremacist neo-Nazis and KKK members who attended the Charlottesville rally” and people like Heather Heyer, who was killed in the terror attack in Charlottesville on Saturday.

“Mr. President, I encourage you to try to bring us together as a nation after this horrific event in Charlottesville. Your words are dividing Americans, not healing them,” Graham said in a statement.

Senate Majority Leader Mitch McConnell did not name Trump, but on Wednesday clearly distanced himself from the president’s comments.

“We can have no tolerance for an ideology of racial hatred,” McConnell said in a statement. “There are no good neo-Nazis, and those who espouse their views are not supporters of American ideals and freedoms.”

Meanwhile Rep. Jim Himes, D-4th District, joined other Democrats in saying Trump’s performance at a Tuesday press conference is a signal that members of Trump’s cabinet should leave the administration.

“Tillerson, Mattis, et al need to understand that their honor, dignity and legacies are at stake. Time to leave this vile administration,” Himes tweeted.