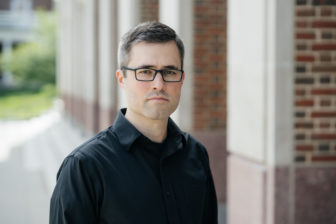 Washington – The death of Heather Heyer and the wounding of 19 others by a neo-Nazi at a white nationalist rally in Charlottesville, Va., has become a recruiting call for a little-known group with an anarchist bent called the antifa.

Antifa members fought with white supremacists in Charlottesville and attend many counter-demonstrations to white power rallies to shield protesters from neo-Nazi violence. But in doing so, the antifa, a contraction of the word “anti-fascist,” sometimes uses violent tactics of their own.

The loose affiliation of radical activists has for years clashed with white supremacists and right-wing extremists.

The presence of antifa members among the mostly peaceful counter-protesters in Charlottesville led President Donald Tump to compare the angry white supremacists – one of whom allegedly killed Heyer – to the counter protesters, saying there was violence “on both sides” and prompting a national furor.

Connecticut GOP party chairman J.R. Romano has said the antifa is close to neo-Nazis, on a “scale of evil.”

“All these neo-Nazis are assholes,” Romano said. “Where Trump missed the mark, and the only way I can explain this, in the grand scheme of things, this white supremacy Nazism, on a scale of evil, that’s a 10. But the antifa guys are like at an eight.”

Although most of its members don’t resort to violence, the antifa believes Trump’s presidency has given new life to a white supremacist movement they’ve been fighting for years and say they must be better armed – even with guns – when they show up at future rallies like the one in Charlottesville.

Mark Bray, a visiting history scholar at Dartmouth and the author of “Antifa: The Anti-Fascist Handbook,” sympathizes with the movement and told the Connecticut Mirror its members are justified in using violence, even to the point of arming themselves, to combat “fascist violence.”

That view is rejected by others, including liberal groups fighting the radical right.

Debate over whether racist violence should be met with violence from the radical left has been ablaze in the twitterverse since the violence in Charlottesville.

“Violence is not acceptable under any circumstances. From anyone,” tweeted Rep. Jim Himes, D-4th District, on Friday. “We have free speech partly to avoid violence.”

In an interview with the Mirror, however, Bray said those attitudes are changing.

Q. Is there violence in the antifa and is there a debate about that in the movement?

A. Antifa is very clear in defending the legitimacy of self-defense. Historically these groups have come about when they were under attack. The difference from how some people may see it, that they view self-defense as legitimate, not only in an immediate sense, but also as they see it, form a preventive sense to prevent fascism and neo-Nazism from becoming truly threatening.

Not all antifa groups partake in violence, and the vast majority of what they do is nonviolent. They monitor the far right, they pressure venues to cancel their events, they find out who these neo-Nazis are, they find our who their bosses are, try to get them fired, try to tell their neighbors to embarrass them. There’s a lot of what they do that has nothing to do with violence. Of course, the violence, gets attention. But they don’t shy away from the fact they are willing to physically confront Nazis and stop their organizing.

Q. Do you personally think it’s okay for antifa members to arm themselves?

A. Yes. Self-defense is a legitimate response to fascist violence. I think it’s always best to accomplish a political goal with as little violence as possible. That’s why the kind of moment where an anti-fascist group defends itself is sort the last point on the sequence of the organizing. Often what they do first is write letters and make phone calls to try to cancel an event, to try to mobilize a community to pressure the event not to be held, to occupy a space so there can’t be an assembly…to try all these steps so that violence is a last resort. But as a last resort, I think it’s ethically justifiable, given the history of the holocaust. In the 1920s, 30s and 40s, the great mistake was not taking it seriously until it was too late. I think you have to stop fascism early, and sometimes that requires self defense.

Q. And that includes the use of guns?

A. Well, if the fascist have guns, and they do…there are groups that are recognizing if fascists have guns, maybe antifascists should too.

Q.  Using clubs is one thing, but guns is another. Are you personally okay with guns?

A. I think everything should be done to avoid escalating violence. But if you face an armed fascist threat, I think using firearms in self-defense is an acceptable recourse.

Q. How did the anti-fascist movement come about?

A. In Europe after World War II, the governments that succeeded fascist regimes in Italy and Germany and elsewhere, established themselves as anti-fascist regimes… So, these governments outlawed essentially explicit Nazi and fascist organizing on continental Europe. But what starts to happen in the 1970s and 1980s, despite the anti-fascist laws, white supremacists start to reemerge…and you have the spread of the neo-Nazi skinhead movement…So antifa groups, looking to the lineage and legacy of the anti-fascism of the interwar and World War II period, start to organize, predominantly in self-defense because lots of these neo-Nazi and skinheads targeted left groups, social clubs and social centers and migrants.

So it started largely as units of self-defense formed by leftists of all stripes. It’s inherently pan-radical left politics that unites anarchists and  communists and socialists in coalition with different migrant groups who were under attack…to fight back against these groups where in some cases the police were complicit, in some cases the police looked the other way and in some cases governments who considered themselves officially anti-fascist could not accept the fact that they had not fully succeeded in preventing fascist politics from re-emerging. These kinds of factors converged to create the modern antifa movement.

Q. How did this become an American movement?

A. In the U.S., these politics were first transposed here in the late 1980s, when anti-racist skinheads — skinheads were originally not racist, but then neo-Nazis created their own Nazi version which became more well-known — antiracist skinheads from Minneapolis who were reading magazines from Britain about the anti-fascist action movement over there started their own antiracist action movement. The changing of the words from antifascist to antiracist tended to better fit what they believed was the temperature of the American political climate. And then the anti-racist action network expanded rapidly during the 1990s with chapters in hundreds of cities and towns across America. It kind of hit a lull in the mid-2000s, gradually started to expand in the late 2000s with a few new groups popping up, and these groups were more directly influenced by the European model and started to call themselves antifa, instead of anti-racist action… With Trump and the alt-right, more people are seeing it as a recourse to turn to to fight back at the far right.

There are certainly dozens and dozens of groups around the U.S. that were started during the Trump campaign or after the inauguration. But it’s hard to say how many people, because you don’t even know how many people are in a group because they are very secretive.

Q. Why is the antifa so secretive?

A. Well, I mean fascists and Nazis are very violent. And neo-Nazis finding out where you live and where you work and threatening your coworkers and threatening your family is very scary. And so protecting your identity…if you are working a job and your employer may not be wanting you to do this kind of work, you don’t want them to find out this is what you do during your free time.

Q. Most of those who demonstrate against the far right are not antifa members. Some liberal groups have a real problem with the violence….

A. That is true, but less than it used to be. I think that there is a willingness to have a conversation, post Charlottesville.