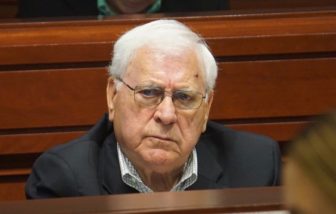 Increasing taxes on the wealthy — a solution in several state budget crises — seemed off the table this year.

But the discussion may not be over yet.

With the state budget standoff about to enter its third month — and with towns about to lose hundreds of millions of dollars more in state aid — at least one moderate Democrat wary of taxing the rich is taking a second look.

And sources say other moderates that still oppose raising taxes on the wealthiest households — a nonstarter for Gov. Dannel P. Malloy — have approached legislative leadership to discuss the option.

Rep. Daniel Rovero, D-Killingly, told The Mirror Wednesday that while he still hopes to avoid any substantial tax hike, he now believes a modest income tax increase on Connecticut’s richest citizens is preferable to the sales tax increase and deep municipal aid cuts offered as alternatives.

“I think it is a fairer tax,” Rovero said of the tax on wages, suggesting something aimed at households earning at least $500,000 — and focused chiefly on those topping $1 million — is the least offensive of the revenue-raising options.

Rovero noted that Malloy and legislators from both parties have proposed raising income taxes on the middle class and the working poor, not by raising rates, but by eliminating or restricting tax credits.

“So why add a sales tax increase or a property tax increase on top of that?” the Killingly lawmaker said. “For some of the people who are just surviving now, this would be a big tax increase.”

Rovero added that lawmakers still need to press towns to reduce spending more and to remove all new programs from state budget proposals.

“I still think there is more we could cut, and we need to get serious about that first,” he said.

Malloy, a moderate Democrat, has pressed hard this year to avoid going back to the income tax, the state’s single-largest source of revenue.

An early May forecast from state analysts warned Connecticut will have nearly $1.5 billion less to spend over the next two fiscal years than originally anticipated. That decline was driven largely by eroding income tax receipts.

So does the administration consider raising income taxes on the wealthy to be reasonable topic for budget negotiations?

“We can only assume this is a joke,” Malloy spokeswoman Kelly Donnelly said. “So far the General Assembly has been unable to move a balanced budget out of either chamber. It’s confounding that even before they attempt to pass a budget, the House is already putting new taxes on the table. This is all too typical, at a time when our budget solutions should be anything but typical.”

The governor has proposed billing cities and towns for a total of $400 million per year to help cover skyrocketing contributions to the municipal teachers pension fund.

Malloy also has proposed deep cuts to non-education grants and a massive redistribution of education aid away from wealthy and middle-income towns and into the poorer cities.

The Connecticut Conference of Municipalities and the state’s Council of Small Towns both have warned that the governor’s budget would spark local property tax hikes across the state, particularly when both the governor and legislature also are recommending cuts to existing municipal aid programs.

But the administration says the billing system would force towns to reduce spending and also would begin to address a teacher pension program that favors wealthy communities.

As an alternative, House Democrats have proposed raising the sales tax rate from 6.35 percent to 6.85 percent, imposing surcharges on restaurant and hotel transactions, and boosting luxury tax rates.

Malloy says the House Democrats’ budget still is too reliant on raising taxes.

House Speaker Joe Aresimowicz, D-Berlin, said it’s not surprising that rank-and-file legislators, who have had an opportunity to see the alternative to tax hikes — a huge cost shift onto cities and towns — are beginning to research alternatives, including taxing the wealthy.

“Things that were highly objectionable don’t seem so bad” when faced with the alternatives, the speaker said, adding the town aid cuts and pension bills “are pretty shocking to some legislators.”

Despite pressure from Malloy, some other Democrats, and all Republican legislators to avoid discussing income tax hikes, Aresimowicz has refused to rule it out entirely and said he still won’t do so.

“I’m willing to discuss it at the table. It all comes down to 76 votes in the House,” he said, referring to the minimum number of ballots needed to pass a budget in the 151-member chamber.

Others have been pressing for higher taxes on the wealthy.

Members of the legislature’s Black and Puerto Rican Caucus have said since March that Connecticut’s wealthiest cannot be excused from tax hikes while the poor and middle class are being asked to pay more.

“My sentiments are the same,” said Rep. Brandon McGee, D-Hartford, a member of the caucus. “I still think we should look at all options on the table and really hone in on revenue ideas.”

Efforts to solve the budget crisis without taxing the wealthy haven’t produced a solution yet, McGee said. “We’ve been talking and talking, and it seems like we’re really going around in a circle,” he added.

Advocates for social services, labor and municipalities also appealed last week to the governor and legislature  to consider  higher income taxes on the wealthy, tolls, a sales tax expansion and other revenue hikes to avert deep budget cuts.