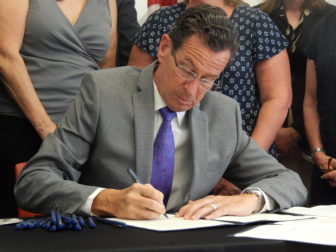 For the third year in a row, Gov. Dannel P. Malloy has put forward and signed legislation aimed at curbing the growing opioid epidemic in Connecticut.

The governor’s bill-signing ceremony Thursday came days after the Office of the Chief Medical Examiner reported that an average of nearly three Connecticut residents are dying every day from accidental drug intoxication. The state is now on pace to hit more than 1,000 opioid-related deaths by the end of the year, which would break the previous year’s record of 917 deaths.

“This is very different than anything we’ve ever seen in our country before,” Malloy said. “This is a malice. It is a willingness to make a few quick bucks before you die.”

The bill Malloy signed is not as wide-reaching as changes enacted last year, but it increases oversight of prescriptions for painkillers and requires certain individual and group health insurers to cover medically necessary, inpatient detoxification treatment. It passed with unanimous backing in both chambers of the General Assembly.

That bill – now in law for more than a year – requires first responders to carry overdose-reversing drugs, limits initial opioid prescriptions to seven-day supplies in most cases involving acute pain, makes changes to a prescription monitoring program aimed at helping prescribers identify patients who could be misusing drugs and charged the state’s Alcohol and Drug Policy Council with developing a plan to reduce the number of opioid-induced deaths in the state.

Its passage in turn built on the previous year’s opioid bill, which required prescribers to report each opioid prescription to the state’s Prescription Monitoring Program within 24 hours. It was previously seven days. The 2015 legislation also gave families and the medical community – via a prescription from a certified pharmacist – access to naloxone, a life-saving substance that reverses all or part of the effects of an overdose.

But the opioid epidemic only has continued to worsen in recent years. The Office of the Chief Medical Examiner reported Monday that 539 fatal overdoses occurred in the first half of 2017, more than 55 percent of which involved fentanyl mixed with heroin or cocaine.

Malloy broke from his prepared remarks to speak directly to addicts.

“If you are abusing heroin, that’s bad,” he said. “But I want to share with you, if you’re abusing heroin or opioids, there’s something far worse. Someone is trying to poison you to death – not with heroin, but with fentanyl.”

The number of fentanyl-related deaths has spiked in recent years, rising from 14 in 2012 to 508 in 2016. It is projected to reach 644 this year. The substance is routinely mixed with other substances, such as heroin and cocaine, in varying degrees of potency.

Hartford Mayor Luke Bronin said his city has been the hardest hit in Connecticut. He said Hartford and other affected cities and towns need more help than the state can offer.

“Ultimately, this is a national public health crisis that demands a national, fully funded public-health response,” Bronin said. “This is a national crisis, and it demands national leadership with the same courage that our local and state leaders are demonstrating here – over the legislative session and today.”