Care4Kids enrollment down 7,500 since closing to new families 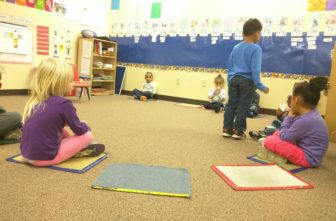 Care4Kids, which once helped low-income parents of more than 22,000 children pay for day care so they could work, has reduced its enrollment by one-third, a year after closing to virtually all new applicants.

Child care providers are concerned that dwindling enrollment in the program is hurting their ability to fill open spots, which could mean lower staff ratios, closing classrooms or closing entire child care centers. The impact could be felt not just by Care4Kids families but by any family depending on a child care provider where Care4Kids children are enrolled.

The list of would-be eligible families waiting to get into the program has grown to 4,500 families, according to the state Office of Early Childhood. That’s less than the 5,000-family projection from earlier this year.

Eligibility for the program was tightened because, if it weren’t, federal rules changes — which came with no additional federal funding — would have cost the state an additional $33 million annually.

To lessen the paperwork burden on families, the federal changes allowed families to prove their continued eligibility once a year rather than every eight months. Parents who no longer qualified for a subsidy because their income increased or they lost their job also were allowed to remain in the program for a three-month grace period.

The changes have the effect of delaying the loss of eligibility for some families and thus slowing turnover and the availability of subsidies.

The program, which offers subsidies from about $40 to $337 per week, closed in two stages. In August 2016, enrollment was closed to working families earning less than 50 percent of the state median income. In December, it was closed to teenage parents attending high school, along with former recipients of Temporary Assistance for Needy Families, often referred to as welfare benefits. The only group currently eligible to enroll consists of working TANF recipients.

“We are experiencing openings in spaces that historically we don’t have openings in,” said Georgia Goldburn, director of the non-profit Hope Child Development Center in New Haven, which typically serves 70 to 75 children but is now down to about 60.

That might not sound like much, but infant programs are costly, with a minimum of one staff member per four children.

“You lose money on the infants and toddlers. You internally subsidize them with your preschool program,” said Merrill Gay, the executive director of the Early Childcare Alliance, which lobbies on behalf of providers.

For a program operating at the minimum ratio, one vacancy in four slots means providing care for the remaining three children costs 33 percent more in staff time per child.

“We have to maintain, for infants and toddlers, a ratio of four to one. We’re operating at a loss […] If we lost one child it’s an even bigger loss,” Goldburn said.

Goldburn said Hope prefers to operate with a lower child-to-staff ratio than is required. The three vacancies she mentioned are in a room that typically has eight children and three staff members. Three fewer children would mean cutting one staff member.

Child care providers are bracing for September, when older children, whose Care4Kids subsidy is grandfathered, enter kindergarten, and are not replaced with new Care4Kids children. “We expect to see an increased drop in the number of preschoolers on Care4Kids,” says an August policy brief from the CT Early Childhood Alliance and the Connecticut Association for Human Services (CAHS).

In fiscal year 2017, 32 child care centers and 15 family care providers closed, saying they weren’t profitable, according to closure reports compiled by the United Way.  Gay — the executive director of the providers’ lobbying group — says he expects closures to increase as Care4Kids enrollment continues to dwindle.

Officials say there could be limited progress on the horizon.

Chris McClure, spokesman for the governor’s Office of Policy and Management, said the limits put in place last year largely stemmed the Care4Kids program’s deficit, but a $400,000 appropriation from the state general fund was used to shore up the program. Care4Kids cost $124 million in the fiscal year that ended in June.

The governor has allocated $115 million for the program in his executive order, under which the state has been operating since July 1 in the absence of an adopted budget.

“Based on preliminary discussions with [the Office of Early Childhood], this amount should be sufficient enough to even start taking families off the waiting list and offering them subsidies later in the year (albeit, probably a small number),” McClure wrote in an email Wednesday. “Several iterations of legislative budgets have included a little over $10 million in additional funding for C4K’s in FY18, bringing the total appropriation to approximately $125 million. This would allow more families to come off the waiting list.”

Care4Kids enrollment declines, July 2016 to July 2017
This table lists the number of children enrolled in Care4Kids in July of 2016 and 2017. Overall the program has decreased by close to 7,500 children, or 33 percent.
CTCare4Kids.com, State Department of Education Wealth Rank
Jacqueline Rabe contributed to this report.

For analysis code used in this report, and what’s left on the cutting room floor, visit our GitHub repository.
We encourage you to check our work and use it as a basis for your own.