No CT budget deal yet as another target date nears 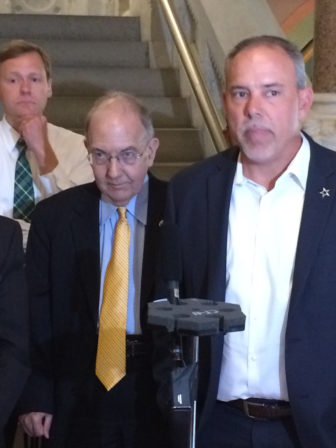 And given that the legislature also has not reached a tentative deal with Gov. Dannel P. Malloy, the prospects of major municipal aid cutbacks at the end of September loomed large Tuesday.

Democratic leaders still were uncertain whether any of their budget proposals could pass in both chambers.

House Speaker Joe Aresimowicz has said he believes his caucus’s proposal could clear the House — where Democrats hold a 79-72 edge. But Senate President Pro Tem Martin M. Looney, D-New Haven, still was unsure whether any proposal would pass in the Senate, which is split 18-18.

“That question is not answerable at this moment,” Looney said, adding House and Senate Democrats would be meeting with their respective members in closed-door caucuses later this week and should have a clearer picture after that.

Meanwhile, Republican leaders said that they still are refining their latest budget proposal and remain unwilling, at this point, to support any Democratic plans.

House Minority Leader Themis Klarides, R-Derby, said Republicans also are lacking details on a House Democratic plan. “We haven’t even seen a full budget by the House and Senate Democratic caucuses,” she said.

Aresimowicz called that comment “a lie” and said his caucus released full details of their last plan in late June.

Republicans have said they are revising their budget proposal. Some of the projected savings in that plan no longer are achievable because of new restrictions on worker layoffs established as part of a union concessions deal ratified earlier this summer.

This new GOP budget, expected out by week’s end, would incorporate the savings from the union concessions deal but also would replace those unachievable savings — at least in part — by curbing labor costs tied to non-union employees.

“Having a document that addresses the shortcomings of their budget where it pertains to the (concessions) agreement would be helpful,” Aresimowicz said. “When we get that, we will do a side-by-side comparison.”

The three senators agreed at the time to support a union concessions plan that also extended the state employee unions’ benefits program from 2022 to 2027 in exchange for a pledge from Democratic legislative leadership to make a best effort to include those reforms in the new state budget.

Some of the reforms sought by the trio would restrict in statute employee benefits the state could offer in future contracts. Others would end automatic cost-of-living adjustments to pensions, remove overtime earnings from pensions calculations, and restrict future benefits contracts with state employee unions to no more than four years in duration.