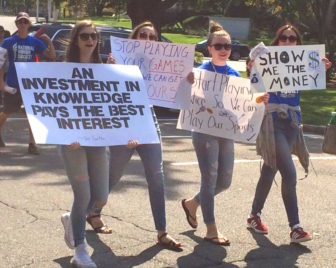 Students from Lewis S. Mills High School in Burlington protest the lack of a state budget Sunday outside of the Capitol.

As state government’s ongoing budget standoff prepared to enter a crucial week, about 200 students and teachers from a regional high school in Burlington took their demands for a new budget Sunday to the legislature’s front door.

Protestors outside of the Capitol urged legislators and Gov. Dannel P. Malloy to compromise on a new, two-year plan to help preserve athletic programs, clubs and reasonable class sizes in their school district and in others.

Armed with chants and signs that delivered messages like “no budget, no future,” and “small towns deserve an education too,” students said the uncertainty caused by the 10-week budget standoff has dominated the first few weeks of the new school year.

Lauren Alvarez, a sophomore at Lewis Mills, said her plans to participate in the Model United Nations and Book clubs both have stalled because of a lack of local resources — all of which she said can be traced back to the state budget standoff.

“We can’t even run the clubs because there’s not enough money in the budget,” said Alvarez, who carried a sign quoting Benjamin Franklin that read: “An investment in knowledge pays the best interest.”

Cities and towns across Connecticut have been affected by the fiscal debate that has paralyzed state officials for months — the question of how to solve massive projected shortfalls in state finances.

Analysts say surging retirement benefit, debt and other costs, coupled with declining income tax receipts, would drive state spending $1.6 billion over revenues this fiscal year, a shortfall of 8 percent, unless adjustments are made.

Since the new fiscal year began on July 1 without a new budget, Malloy has said he has no legal alternative but to reduce spending on municipal aid and social services, since most other expenses are fixed either by contract — such as debt service — or by federal entitlement rules, such as Medicaid programs for the poor. 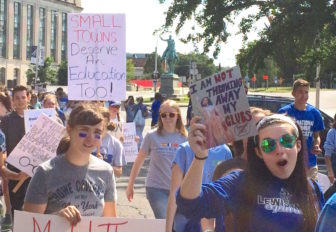 Morrell said the uncertainty over this situation not only has students fearful about the future clubs and sports programs, but ultimately about the fate of their academics.

“There’s a sense of taboo, that no one wants to talk about the budget crisis,” he said. “It’s something that’s affecting us, but nobody wants to say anything about that, so this is sort of our outcry.”

“Would there have to be serious staff and faculty cuts” if the standoff continues?” Morrell asked. “That would impact the size of our classes and the quality of our education, and that’s just something we’re not willing to compromise.”

Tania McNaboe, an English teacher at Lewis Mills and an advisor to the National Honor Society chapter, said students organized a demonstration within days after she suggested they turn their frustrations and fears about the state budget crisis into something positive.

“They came to me and said, ‘Why can’t they compromise? Why does it have to come to this? We’ve been taught since kindergarten to share,’” McNaboe added. “So I said, ‘If you feel this way, put your education to work and say something.’”