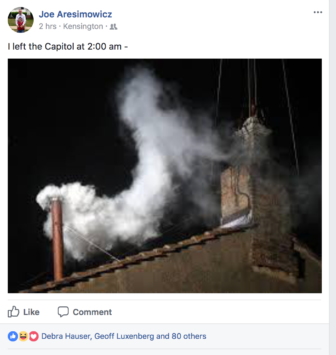 A Facebook message from the House speaker. Others say he was premature.

A tentative understanding on most spending and revenue items gave them a framework, but sources also said several crucial policy details — including the state’s role in overseeing distressed municipalities — remained to be ironed out and could seal or sink any agreement.

The optimism of House Speaker Joe Aresimowicz, D-Berlin, was evident on his Facebook page: He posted a photo of white smoke swirling from a chimney, a gesture that others called premature.

Democratic leaders still must sell this two-year budget plan to rank-and-file members before Thursday’s scheduled votes in the House and Senate. Moderate Democrats have expressed concern about the tax hikes being proposed and have called for greater fiscal reforms.

Though full details were not available, the new plan for this fiscal year and next would raise taxes on hospitals by more than 50 percent to leverage hundreds of millions in new federal dollars and help close projected shortfalls in state finances of $1.6 billion this fiscal year and $1.9 billion in 2018-19.

And while it would avoid increases in the base income and sales tax rates, it would curtail income tax credits for the middle class and working poor.

The new budget also raises the cigarette levy by 45 cents per pack and includes tax hikes on other tobacco products and real estate conveyances.

Sources said there is still some disagreement between the governor and Democratic legislators over the latter’s proposal to impose a $1 surcharge on cell phone bills. This would raise a projected $17 million this fiscal year.

The deal would require cities and towns to begin paying a portion of the annual contribution to the teachers’ pension fund.

Communities would pay only the “normal cost,” an actuarial term referring to the full amount that must be set aside annually to cover the future pensions of present-day teachers. And that burden would be phased in over two fiscal years.

But the package also largely preserves education aid for cities and towns and redistributes grants from wealthy communities to poorer ones in a much less pronounced fashion than Malloy sought.

Since the new fiscal year began on July 1 without a new budget, Malloy has said he has no legal alternative but to reduce spending on municipal aid and social services.

Surging debt and other retirement benefit costs fixed by contract, coupled with declining income tax receipts, already threaten to push finances deep into the red. And Connecticut also spends more than $2.5 billion per year on Medicaid programs, which are fixed by federal entitlement rules.