Malloy: It’s time for ‘the courage to compromise’ on Connecticut’s budget 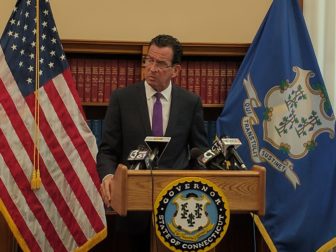 Gov. Dannel P. Malloy reaffirmed his opposition to the new state budget Monday, arguing it would raid the pension funds, decimate higher education and leave the City of Hartford vulnerable to fiscal insolvency.

And while the Democratic governor urged all sides to compromise — and said he probably would have to accept some GOP proposals he opposes — Malloy also said he would not accept a plan to scale back scheduled payments into the state employees’ pension fund.

“This is serious hard work to put the state back in balance with respect to its unfunded, long-term obligations,” Malloy told reporters. “And what do we get? We get an invitation to make it worse.”

That “invitation,” according to the governor, was included in the two-year budget that the Senate and House approved on Friday and Saturday, respectively.

That budget proposal, crafted by Republican legislators but also backed by eight Democratic lawmakers, incorporates savings from the concessions deal unions and Malloy struck earlier this year, as does the compromise plan reached by the governor and Democratic leaders.

Many Democratic leaders and union leaders have questioned whether the state can make these changes unilaterally or whether that would violate collective bargaining rules.

And Monday he added that, “We’re seeing the re-introduction of Rowland economics” — a reference to agreements Gov. John G. Rowland struck with employee unions in 1995 and 1997.

Those deals effectively enabled Rowland to put the state’s schedule of required payments into the employee pension fund on a balloon mortgage schedule — deferring some of the required yearly contributions for more than a decade and ultimately inflating pension costs significantly for future taxpayers.

“He is the governor. I respect that. He is entitled to that opinion,” Senate Republican leader Len Fasano of North Haven said of Malloy’s criticism of the GOP’s pension savings proposal.

But Fasano said Republicans believe the plan is both legal and fiscally balanced.

“He may not appreciate that, but obviously that passed bipartisanly in the House and Senate, so there’s certainly a number of folks who believe we should be looking at that,” Fasano added.

The two-year budget crafted by Republicans also was criticized for:

“There are many fundamental problems with that budget that passed over the weekend,” said Senate President Pro Tem Martin M. Looney, D-New Haven. “But I certainly agree with the governor now that we need to come together for new bipartisan negotiations.”

Malloy, who has vowed to veto the budget plan once it is transferred to its desk, also tried to strike a conciliatory tone on Monday.

“Collectively we need to muster the fortitude to take bold action, to demonstrate a willingness to make hard choices and to have the courage to compromise,” the governor said.

Malloy added, “That means that an eventual budget can and likely should include Republican ideas, even ones that I don’t like. And, if we want a bipartisan solution, Republicans will need to adopt some of the ideas from myself and other Democrats.”

Democrats hold a slim 79-72 edge over Republicans in the House while the Senate is split evenly 18-18.

That’s always beneficial to have those [bipartisan] discussions, so we look forward to it,” Fasano said. “I think that’s a good first step.”