An estimated crowd of 100 state employees, other union members and community activists rally Thursday against the GOP budget on the North steps of the Capitol.

Labor groups and advocates for Connecticut’s cities rallied Thursday outside the Capitol, urging Gov. Dannel P. Malloy to veto a Republican-crafted budget they argued would hurt workers and students.

The estimated crowd of 100 that gathered on the north steps also charged that the budget, which cleared the House and Senate late last week with support from nine Democratic legislators, would push the City of Hartford into fiscal insolvency.

“Connecticut is in a critical moment right now. We have to decide whether or not we’re going to invest in our people and in a brighter economic future for our state,” said Carlos Moreno, interim director of the Working Families Party’s grassroots arm. “Supporting this anti-worker, anti-family budget is passing a vote against every principle that has made Connecticut a fantastic state in which to live.” 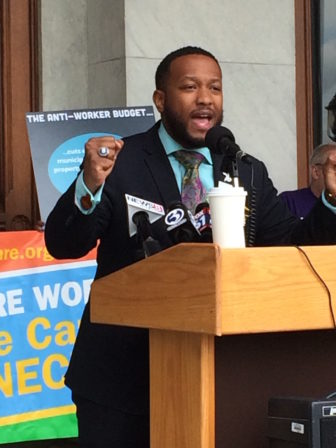 “Long story short, this budget hurts people … and for what purpose?” said A.J. Johnson, pastor of the Urban Hope Refuge Church in Hartford. “We are facing a moral crisis in Connecticut. Thousands of people — black, Latino, immigrants, whites and working class — are struggling to get by on unlivable wages. Somebody — say that isn’t right. This current budget doesn’t make it easier on them.”

The Republican plan would unilaterally reduce state employee pension benefits after mid-2027 and reap some of the savings now, reducing pension contributions by $321 million across this fiscal year and next.

Malloy and union leaders have said they believe this is legally risky, would almost certainly be challenged in court, and constitutes bad faith bargaining on the state’s part just months after unionized workers agreed to major concessions.

It would reduce funding for public colleges and universities by roughly $300 million over this fiscal year and next, combined.

Cindy Wolfe Boynton, a professor at Housatonic Community College, predicted most of those reductions, if signed into law by Malloy, would translate into higher tuition and fees.

“If state spending is cut, students are going to have to pay money they can’t afford,” she said.

The GOP plan also orders the governor to achieve $260 million more in savings after the budget is in force than the plan Malloy and Democratic legislative leaders proposed. And while the governor is supposed to find those savings by combining agencies and reducing executive appointments, some legislators argued that to hit those targets, spending for social services and health care also would be reduced.

Malloy has said he would veto the budget. Though the bill was approved early Saturday morning in the House of Representatives, the legal process of transmitting it to the governor can take several days.

Kelly Donnelly, spokeswoman for Malloy, said shortly before 1 p.m. that the bill still hadn’t been received by the governor’s office. 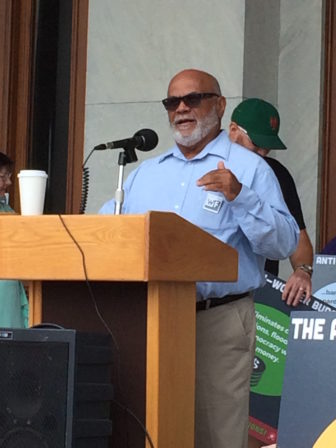 House Minority Leader Themis Klarides, R-Derby, repeated her call Thursday for the governor to sign the budget. “We can use this Republican, bipartisan budget as the basis to move forward and resolve whatever outstanding issues that are identified,” she said.

“It’s ironic to see state employee union leaders organizing a protest on budget cuts that are a direct result of their labor deal, which has sucked our budget dry,” added Senate Republican leader Len Fasano. “Our current financial decisions have been made all the more difficult because our options were dramatically limited by the SEBAC (State Employees Bargaining Agent Coalition) deal and the governor made it clear he would not support a budget with massive tax increases. … The budget that passed the legislature with bipartisan support still manages to prioritize core services for working and middle class families.”

The Connecticut Republican Party organized a rally this past weekend, attended by an estimated crowd of 50 people, urging Malloy to sign the GOP budget.

The rally, which was sponsored by an arm of the Working Families Party and by some of the largest state employee labor unions, also drew activists from Hartford, which is at risk of declaring bankruptcy.

Mayor Luke Bronin has said the city needs at least $40 million in additional state aid this fiscal year to stave off that fate. The new budget increases aid to Hartford by just over $7 million.

Hartford City Councilor Wildaliz Bermudez said “This budget would absolutely bankrupt the city of Hartford” and called it “a direct attack on higher education and public schools.”

Some also have labeled the budget as unfair for keeping municipal aid flat, even in wealthy communities, while not providing enough to meet the needs of distressed cities.