Talk of bipartisanship, but little action on Connecticut’s budget

Calls for compromise and bipartisanship began to emerge in last week’s political discussion over Connecticut’s continuing failure to adopt a budget, but there was little to show for it.

Gov. Dannel P. Malloy told state legislators they need “the courage to compromise,” but, after calling the Republican Party’s budget proposal “one hot mess,” said he doubts there will be any agreement on a bipartisan budget before Oct. 1, when cuts to municipal state aid are scheduled to take effect. 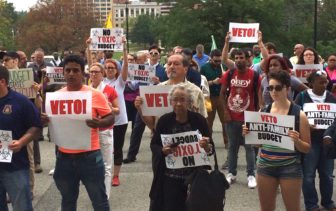 An estimated crowd of 100 state employees, other union members and community activists rally Thursday against the GOP budget on the north steps of the Capitol.

Malloy already has said he will veto the Republican plan that won approval with the help of nine Democratic votes in the legislature. But state employees and labor officials rallied Thursday outside the Capitol to underscore their opposition to the GOP-fashioned bill that, in one protestor’s words, works “against every principle that has made Connecticut a fantastic state in which to live.”

Malloy says his criticism of the budget should not be construed as partisan posturing, but as “constructive feedback” for moving forward to address the state’s needs and its crushing budget deficit. So far, neither the GOP or Democratic Party proposals solve the state’s long-term financial problems.

Certainly there are many unresolved issues connected to the budget debate – the biggest, perhaps, being how Connecticut will financially support local schools and state colleges.

The elimination of the state’s ground-breaking Citizens Election Program in the GOP budget is also of great concern to a variety of public interest organizations.

Bipartisanship seemed to be a casualty on the federal level, too, where hopes for a collective solution the Deferred Action on Childhood Arrivals program was overshadowed by a  renewed Republican effort to repeal and replace the Affordable Care Act.

Connecticut would take a $7 billion hit under the Graham-Cassidy proposal that would repeal the Affordable Care Act and restructure the entire health insurance market, analysts say. Friday, Arizona Sen. John McCain said he would not vote for the bill, putting its passage in grave doubt.

Before that, however, Sen. Chris Murphy called the Republican measure “the worst bill yet” for Connecticut. ” A quarter of the patients at [MidState Medical Center in Meriden] are covered by Medicaid,” he tweeted. “Docs I spoke with said cuts in Trumpcare would be catastrophic.”

Sen., Richard Blumenthal in a meeting to discuss hurricane aid for Puerto Rico.

That word — catastrophic — might also be used to describe the devastation Hurricane Maria caused to Puerto Rico, the American territory with many familial connections to Connecticut. “Your government will not forget you,” Sen. Richard Blumenthal tweeted after a meeting with Puerto Rican leaders.

Big problems aside, there were a few other things going on.

Gubernatorial candidate and Middletown Mayor Dan Drew admitted “an error in judgment” in his use of a city mailing list to solicit contributions.

In Bridgeport, MGM Resorts International made a pitch for a new casino there; and in downtown Hartford a two-building state office complex was dedicated in the names of the late Gov. Ella T. Grasso and Lt. Gov. Joseph J. Fauliso.

And Attorney General George Jepsen said his office would continue aiding a greatly expanded investigation into whether pharmaceutical manufacturers and distributors have played a role in the national opioid epidemic.