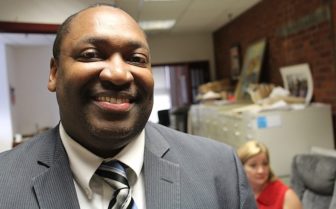 The new chief of New Haven’s Gateway Community College has found that two campuses together can help more people launch machinist, railroad or ultrasound careers — even when a budget-strapped state is cutting back funding.

Paul Broadie has taken on the challenge of producing more with less since succeeding retired Gateway President Dorsey Kendrick in July while simultaneously continuing in his job as president of Bridgeport’s Housatonic Community College, which he has held for two and a half years.

In his first three months on the job, he has made a point of “putting everyone at ease that” change “is going to be OK” now that one president is overseeing two campuses, he said in an interview on WNHH FM’s “Dateline New Haven Program.” Broadie spends two full days a week at each campus. “My running joke,” he said, “is I need a helicopter on Fridays,” when he battles I-95 gridlock to spend a half-day at each campus.

Meanwhile, he has already found $1 million in cost savings while discovering ways to offer more opportunities for students by having people at the two campuses work together. Gateway —- the state’s largest community college, with over 7,000 students — and 5,200-student Housatonic officially remain separate colleges, at least for now. But with a shared president, and under pressure to cut costs in a state currently without an approved budget and a projected $5.1 billion two-year deficit, the campuses’ destinies, and in many cases daily operations, are becoming joined.

Broadie, who is 49, has assumed the helm at a time of change in the state higher education system, as well as in the midst of a separate trend that you could call the Bridgehaven Convergence.

New Haven and Bridgeport, until now unrelated municipal planets with separate orbits and identities, are suddenly operating more and more as partners. Its two main hospitals have one owner (Yale New Haven Health System). Its two legacy corporate daily print newspapers are now owned by one company, with identically designed websites and shared articles about both communities. The two cities’ mayors teamed up in recent months on pitches for a new MGM casino and Amazon headquarters. They’re planning to start pitching potential big employers together on locating here, presenting their two communities as part of a single region that will compete better in the new economy by pooling their strengths.

Broadie described a similar strategy for the two community colleges he now oversees.

“You’re going to see a greater partnership between the two institutions that expand programs. No longer will we have silos,” Broadie said. “Students don’t care about our silos and our barriers. We need to take those silos down and serve the needs of our students.

Some of the $1 million in savings comes from combining overhead costs from the two campuses: Having one marketing office with one set of publications, for instance. Broadie has combined the two campuses’ dean of administration positions into one rather than fill a vacancy at Gateway. He’s looking at group purchasing across campuses and outsourcing the verification process for financial aid.

Then there’s the administration of specific academic programs. Both community colleges are stepping in to fill an important job-readiness gap in the state: The need for surgical technologists, or operating-room technicians. Hospitals in both cities have shortages to fill. But the state’s technical high schools eliminated their surgical tech training programs. So Housatonic started to develop its own program after Bridgeport hospital decided to transfer an existing training effort there. Meanwhile, Gateway looked at creating its own program.

Upon taking the Gateway helm, Broadie had both schools work together to create one program for both campuses. Forty students, 20 from each campus, are starting out in it, he said. It will have one director, one set of teachers, one clinical coordinator, rather than two of each.

“I saw the value of seeing things in a single lens and not competing for students and duplicating resources,” Broadie said.

Another example: the two schools’ manufacturing program. Modern factory jobs require more advanced skills than in the past. The two campuses had separate nine-month programs for obtaining certification for those jobs. two sets of facilities, two staffs. It turns out Bridgeport has an “amazing” facility for the first portion of the program, learning to operate computer-controlled CNC machines. So the two schools have combined their programs, with all students beginning the program at the Housatonic facility. They complete the advanced learning portion of the program on the Gateway campus. Same offerings. Same number of students. Lower cost.

A new state program is making it easier for students to travel between the campuses. Called U-Pass, it allows state college and university students to ride buses and trains for free. (A $20 annual student fee pays for it.) Both Housatonic and Gateway are a quick walk from their respective train stations. (Click here to read more about U-Pass.)

Not all cuts are painless or opportunities to rethink how to offer a better education for less money. Broadie has been unable to fill important faculty positions with full-time professors, at least since July, when Connecticut’s last approved budget ran out. For now, Gateway has made use of more adjunct professors. He said he hopes that when a new budget is passed, he’ll be able to fill those slots.

He’s also been meeting with presidents of other New Haven colleges, two of whom, at Southern Connecticut State University and Albertus Magnus, have also recently assumed their posts. They’re discussing how to upgrade “articulation agreements” that enable students to transfer from Gateway to four-year colleges.

Paul Broadie didn’t go to college to pursue a career in college administration. A product of the Bronx, he majored in business at Mercy College. His plan was to obtain an MBA and go into the private sector.

He served in student government, where he enjoyed working with administrators and on policy. Upon graduation, Broadie received an offer from the college president that he couldn’t turn down: Work as an admission counselor and have his MBA tuition paid for.

“Once I began to work at a college, I saw very quickly how education changes lives,” Broadie recalled. “For me it was life-changing. And it changed the track of my career. , I didn’t look back. I stayed in higher education.”

In other words, over 28 years in the business, he has extensive experience figuring out how to make multiple campuses work well together. Which comes in handy for his new New Haven-Bridgeport challenge. “For me, it wasn’t really new,” he said. “What was different was that Housatonic and Gateway Community College had grown up separately.”

Given Connecticut’s systemic budget challenges, the Gateway-Housatonic partnership may be just the beginning. Some have called for the state to combine all community colleges into one school. Others have floated the idea of combining the community colleges with the state university system. The betting money is that however that debate turns out, Paul Broadie will be helping steer the ship of change.