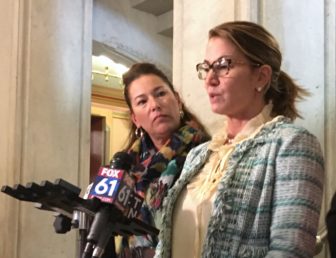 Democratic and Republican House leaders briefed rank-and-file lawmakers Thursday on the details of the tentative, bipartisan state budget deal announced the day before — and emerged with very different perspectives.

House Speaker Joe Aresimowicz, D-Berlin, declared the two-year budget proposal would be passed by an “overwhelming majority” and strong bipartisan support — possibly as soon as next week.

But the top Republican in the House, Minority Leader Themis Klarides of Derby, took care to make no predictions, saying that with any tough budget, her members now must weigh “the good, the bad and the ugly.”

Democrats, who control 79 seats in the House, and Republicans, who hold 72, both will meet in separate, closed-door caucuses again next week.

Senate Democrats and Republicans have their first caucuses on the tentative budget framework scheduled for Monday.

Democratic leaders said they would brief Gov. Dannel P. Malloy about the budget details on Saturday. For nearly three weeks, legislative leaders excluded the Democratic governor’s budget office from negotiations as they tried to strike a bipartisan compromise.

“We’re very comfortable with the fact that we’ll have the votes moving forward out of our caucus to pass this budget,” the speaker said. “And obviously we’re going to appreciate the bipartisan vote.”

Rank-and-file House Democrats said they were concerned about a wide variety of subjects in the tentative deal, including cuts to municipal aid, social services and higher education, as well as tax hikes imposed on middle-income and working-poor households by reducing income tax credits, and a new requirement that teachers contribute an extra 1 percent of their pay to their pension fund.

Teachers, who currently contribute 6 percent of pay, would contribute 7 percent starting next year.

Others criticized the diversion of funds from various conservation programs, including $75.5 million in total taken each of the next two years from two programs funded by surcharges on consumer electric bills.

But Aresimowicz said legislators understand the alternative, which is to require the governor to continue managing state finances by executive order. Because of surging retirement benefit and debt costs — which are fixed by contract — and declining income tax receipts, municipalities have received hundreds of millions of dollars less in state aid this fiscal year than they had received by this point 12 months ago. 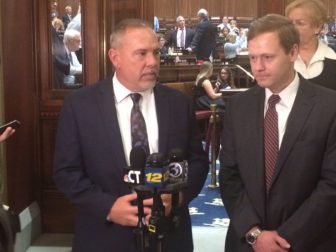 Klarides said the additional pension contribution for teachers might be unpopular among some, but legislators were able to avert something worse.

The Connecticut Education Association, the state’s largest teachers’ union, has objected since February to Malloy’s proposal to shift hundreds of millions of teacher pension contribution costs from the state budget onto cities and towns.

“Although they are not excited about the additional teachers’ contribution, we held firm and made sure teachers’ retirement burden was not put on towns and cities,” the minority leader said.

“Teachers stand together, unequivocally opposed to a teacher tax,” the Connecticut Education Association wrote in a statement Thursday. “It will not help balance the state budget and can and must be eliminated. Over the years, the state has not fully funded or paid its share of the teacher retirement plan. … It is unfair to punish teachers with an increase in the payroll tax to pay a portion of the state’s share.”

Klarides said she also objects to criticism that this added pension contribution is a tax on teachers, noting that workers will get the funds back in the form of pension benefits when they retire.

An earlier Republican budget proposal, which narrowly passed the legislature in mid-September and which Malloy vetoed — would have channeled the additional pension contributions from teachers into the state’s General Fund and not directly into the pensions.

Klarides said there was an error in how the earlier GOP budget was drafted, but it never was Republicans’ intention to have the extra contributions deposited anywhere but into the teachers’ pension fund.

Some House Republicans balked earlier this year at proposals to divert energy conservation funds that consumers must support with a surcharge on their electric bills into the General Fund, saying it is not too far removed from a tax increase.

Klarides said some of her members renewed their objections Thursday.

“I was the person in our caucus that probably felt the strongest in regards to that,” she said. “That is one of those things when you have a caucus and you discuss the good, the bad and the ugly … that’s part of the ugly.”