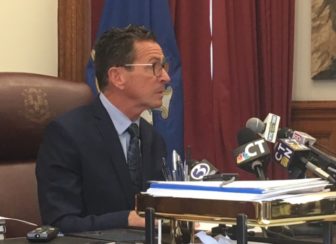 The syncopated rollout of the General Assembly’s bipartisan budget deal got a harshly skeptical review Friday from Gov. Dannel P. Malloy, who either will be the final arbiter of what legislative leaders say will be a satisfactory ending to Connecticut’s long-running budget drama — or just a loud voice from the balcony.

Two days after House and Senate leaders announced an agreement in principle, questions abound about the depth and breadth of spending cuts, the distribution of municipal aid, the source of new revenues, and the extent to which collective bargaining and other labor laws will be changed.

Malloy, a Democrat struggling to resolve the fourth and final two-year budget of his tumultuous two terms as governor of a state yet to recover from the Great Recession of 2008, said he will not accept a budget briefing from legislative leaders until they can produce a document answering those questions.

“I certainly assumed I would have seen a budget well before this hour today — which is what, 46 hours since the budget was announced?” said Malloy, who spoke to reporters from behind his desk at the State Capitol. “In reality, without a line-by-line document with hard numbers, there is no balanced budget to discuss.”

Malloy said he is intent on avoiding committing to portions of a budget without seeing the whole. He is willing to compromise further, he said, but only if he can see the entire fiscal picture, not just a sketch.

“The reason you don’t do that is how can you tell what’s acceptable if you don’t have the whole budget?” Malloy said. “If you are going to make compromises, then you want to know what you are compromising on and what will be contained in that budget.”

Aware that legislative leaders have pointedly said they hope to pass the budget by veto-proof margins, Malloy said he still had control over the fate of a complicated fiscal maneuver — a $344 million increase in hospital taxes designed to trigger even more in federal Medicaid reimbursements.

The legislature can impose the additional tax on hospitals, but the administration plays a role in ensuring the federal government will agree to the reimbursement arrangement. It calls for the state to return the tax revenue and some of the Medicaid reimbursement to the hospitals. The state would net $137 million in new revenue in each year of the two-year budget 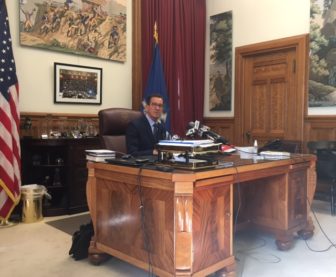 The comment seemed a calculated threat against sending him an unacceptable budget, even if it can pass with a veto-proof, two-thirds margin.

Senate Republican leader Len Fasano of North Haven was dismissive of the governor’s complaints. In an interview, Fasano said he interpreted Malloy’s comments as evidence he already had decided to the veto the budget.

“He’s pretty clear he is vetoing the budget — that’s what he said,” Fasano said.

In a prepared statement emailed to reporters, Fasano tweaked Malloy as a mere spectator to the dramatic conclusion of a budget fight that should have been resolved June 7, the constitutional adjournment deadline of the regular legislative session.

“This is an irrelevant leader trying to make himself relevant,” Fasano said in the statement. “Instead of being open to a truly bipartisan budget that leaders have worked on day after day together as equals, he continues to make himself an impediment.”

In comments to the press, legislative leaders have shared limited details of the budget framework, leaving reporters, lobbyists and even rank-and-file legislators to scramble for more. Significant measures, such a provision that would end the ability of municipalities to impose the property tax on motor vehicles, were almost casually mentioned to reporters in press availabilities.

It caught the Connecticut Conference of Municipalities by surprise. Senate Majority Leader Bob Duff, D-Norwalk, said he proposed eliminating the car tax as a way to help middle-class taxpayers, though the impact was more likely to be higher residential and business taxes to offset the lost car revenue.

Fasano told CT Mirror that legislators also are trying to save municipalities money by changing the prevailing wage law, which dictates wages on many public construction programs, and binding arbitration rules. But he declined to share details.

Malloy said the leadership should release as much detail as possible as soon as possible. He said too many questions are unanswered, including a key one: What will be the criteria used to distribute education aid? In a ruling under review by the Supreme Court, a judge called the state’s present distribution of education funds “irrational” and ruled it unconstitutional.

“We’ve been told that poor towns are getting more aid, but how much?” Malloy said. “Is it enough to begin addressing the massive inequities in education between wealthy and less affluent towns? Is it responsive to the court decision?”

More important, he said, is the question of how much work remains to balance the budget. Legislators say they are close to balancing expenditures and revenues, but concede they are not quite there.

“I can tell you from my personal experience that the last $100 million of a budget are the hardest” to find, Malloy said. “That’s where you either make really difficult choices to finish the job, or it’s where you make really bad decisions just to say that you completed the process.”

Democratic legislative leaders offered responses to the governor’s that were softer than Fasano’s.

“Legislative leaders are continuing to flesh out the final details of the bipartisan budget agreement reached in principle earlier this week,” said Senate President Pro Tem Martin M. Looney, D-New Haven. “Once these details of the fully balanced, bipartisan budget that represents consensus in the General Assembly are settled, we will share them with our caucus and the governor.”

“I always appreciate the governor’s input, and a number of his ideas are part of the bipartisan budget that is being finalized,” said House Speaker Joe Aresimowicz, D-Berlin. “I look forward to meeting with the governor soon to share details of the agreement, and hopefully secure his support. I also expect to have an overwhelming bipartisan vote in the House next week.”